People salvage their belongings from a house damaged by an earthquake in Lumajang, East Java province, Indonesia April 11, 2021, in this photo taken by Antara Foto. - via Reuters

According to the ministry, 5,219 more people were discharged from hospitals, bringing the total number of recovered patients to 1,414,507.

Meanwhile, earlier in the day, eight people were killed and 39 injured as the 6.1-magnitude quake struck off Indonesia's western province of East Java a day earlier, the National Disaster Management Agency said on Sunday.

Hundreds of such public buildings as health centers, education facilities, places of worship and office buildings were also damaged, the spokesman said.

Shelters for the evacuees and logistics facilities have been established.

Food including rice, fast food and noodles as well as blankets and tarpaulins have been distributed by the provincial administration.

The 6.1-magnitude quake hit at 2pm Jakarta time (0700 GMT) on Saturday with the epicentre at 96 km south of Kepanjen town of Malang district and the depth at 80 km under the seabed, according to the agency. - Xinhua
Article type: metered
User Type: anonymous web
User Status:
Campaign ID: 46
Cxense type: free
User access status: 3 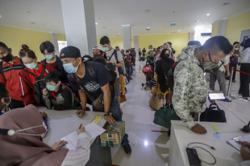