MANILA, Philippines, April 7 (The Philippine Inquirer/ANN) — The Philippines is lodging another diplomatic protest over the continuing presence of Chinese ships in the West Philippines Sea, staying true to its earlier warning that it would file daily protests over Beijing’s failure to pull out the vessels from the area.

This came as two senators recently said the Philippines should unite with its Southeast Asian and Western allies to take action against continuing Chinese aggression in the disputed waters, with one saying that Beijing just “continues to ignore” the diplomatic protests filed by Manila.

“Firing another diplomatic protest. Everyday til the last one’s gone like it should be by now if it is really fishing, ” Foreign Affairs Secretary Teodoro Locsin Jr. said on Twitter Wednesday.

Earlier, the Department of Foreign Affairs (DFA) said it would file a diplomatic protest for “every day of delay” in the removal of Chinese fishing vessels and maritime assets “in the area and vicinity of Julian Felipe Reef and in the Philippines’ maritime zones.”

The DFA’s warning came with a stern reminder to officials of the Chinese Embassy in Manila to accord respect to Philippine officials.

This came after the embassy dismissed as “unprofessional” a statement of Defense Secretary Delfin Lorenzana demanding that China withdraw the vessels from the West Philippine Sea.

The Philippines first lodged a diplomatic protest on the presence of the ships in the area last Mar. 21. 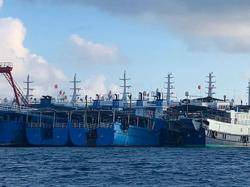