Thongloun held a telephone conversation with his Vietnamese counterpart on Monday (April 5)following his election as the new State President by Vietnam’s National Assembly.

The Lao president congratulated Phuc on his election as the new State President, saying he believed that under his leadership Vietnam would further develop substantially, which would enhance the role and reputation of Vietnam in the regional and international arenas.

Thongloun also said he believed that under the leadership of his Vietnamese counterpart the cooperative relations, friendship and special solidarity between Laos and Vietnam would continue to deepen and be fruitful.

The two presidents said they highly valued their past cooperation which had enabled the implementation of various agreements signed by the two nation’s top leaders, according to Laos’ Ministry of Foreign Affairs.

The leaders also said they were satisfied with the implementation of agreements reached at the 43rd session of the Laos-Vietnam Inter-Governmental Committee late last year.

Thongloun thanked the Vietnamese president for Vietnam’s support to Laos in past years, particularly Vietnam’s assistance with recovery from disasters.

Vietnam was among the first countries to help Laos respond to the Covid- 19 pandemic amid the global health crisis and economic slowdown.

The Vietnamese government also funded the construction of the new Lao National Assembly building at a cost of US$100 million (about 831 billion kip).

Situated on the That Luang esplanade in Vientiane, the stately building was used for the inaugural session of the Assembly’s newly-elected 9th legislature last month.

During their telephone talks, the two leaders discussed their future cooperation, agreeing to further push for exchange visits by high-level delegations as well as continuing to monitor and push for the implementation of agreements signed by top leaders of the two countries.

These events will enable younger generations to better understand the relations, special solidarity and mutual assistance between Laos and Vietnam in the regional and international arenas.

President Thongloun invited the Vietnamese president and his wife to visit Laos at an appropriate date.

Vietnam is the third largest foreign investor in Laos after China and Thailand. As of December 2020, Vietnam’s total investment in Laos stood at US$4.1 billion.

Vietnam is also a key trading partner of Laos, with the value of bilateral trade recorded at US$815 million in the last 10 months of 2020. - Vientiane Times/Asia News Network 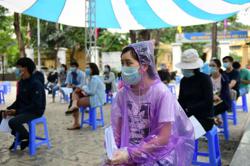 India records more than 4,000 daily Covid-19 deaths as virus cases are coming in smaller numbers
Indonesia pauses distribution of a batch of AstraZeneca vaccine
Cambodia confirms another 350 new Covid-19 cases as another 500,000 doses of Sinovac vaccine arrive in Kingdom
"China's CPC has made the country a powerhouse and always a good friend to Laos"
Brunei minister: Don’t let new technology affect family ties
Upward momentum on Bursa Malaysia to spill over next week
Vietnam to get 31 Million Pfizer-BioNTech vaccine doses in 2021 as local cases keep rising
Myanmar anti-coup fighters retreat from town as US makes appeal
Ringgit expected to weaken against US dollar from Monday (May 17)
Working group sent to guide Covid-19 control in Liaoning; new outbreak suspected