Phnom Penh, April 4 (Phnom Penh Post/ANN): Over 100 pigs originating in Thailand have been smuggled into Cambodia via Laos.

Cambodian authorities say the pigs were imported through Laos to hide their origin as Thailand faces an outbreak of African Swine Fever..

The pigs originated in Thailand and were illegally imported through the Cambodia-Laos border checkpoint into Stung Treng province on 23 March.

Tan Phanara, Director-General of animal health and production, said authorities had sent the full shipment of pigs to Phnom Penh to have them tested for African Swine Fever.

He said that should any of the pigs test positive for the disease they will have to be destroyed and their carcasses incinerated to prevent the spread of the disease in Cambodia.

Cambodian authorities say traders had first been smuggling pigs into Cambodia from Thailand and Vietnam, however, they soon realized that they could bypass restrictions by simply importing to Laos and exporting again.

African swine fever is not known to transmit across species, meaning the disease is fatal to pigs but does not harm human beings. 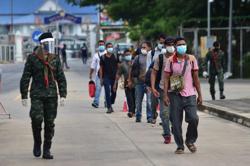