An empty street is seen at Quiapo district in Manila on March 29, 2021, on day one of government's imposing stricker lockdown, as hospitals in the capital struggle to cope with a surge in coronavirus infections. - AFP

Shares in Taiwan and Thailand held to 1% gains as investors await details of a proposed US fiscal spending package that could spur the global economy.

In Manila, shares initially fell 1.7% on stricter Covid-19 restrictions in the capital for this week.

US futures, however, were down around 1% late into the Asian trading hours, keeping a cap on gains in the region.

"Risks to equity markets in the context of Friday's block sales could prove to be a counterbalancing force against supply-chain disruption in gauging the next steps for global yields," Stephen Innes, the chief global markets strategist at Axi, said.

He was referring to a series of block trades on Friday in the US that caused stocks of companies to fall. Japan's Nomura Holdings Inc and Credit Suisse have flagged a possible hit to earnings.

The Malaysian ringgit and yields on its benchmark 10-year bonds were flat ahead of the FTSE Russel decision on whether Malaysian debt will stay in the government bond index. OCBC Bank expects Malaysia to stay in the index and be removed from the watchlist, which it says will see sentiment for bonds improve at the margin.

A surprise removal could prompt outflows. In other news, Malaysian exports in February rose a higher-than-expected 17.6% on shipments of electrical and electronic goods as well as commodity-based products.

The South-East Asian nation has been successful in controlling the spread of Covid-19 through stringent measures, which have helped it reopen its economy earlier than most other regional peers. Indian markets were closed for a public holiday. 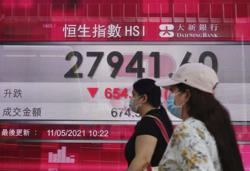