Sidestepping a crackdown on Internet use since the military seized power almost two months ago, hundreds of thousands of protesters and citizens in Myanmar are finding different ways to communicate online, downloading tools to bypass censorship restrictions and turning to alternative media sources and underground networks, according to new research.

They have moved to a mirror site of Facebook on the dark web, used apps that rely on Bluetooth technology to continue messaging each other and turned to lesser known social media platforms to stay connected, according to Recorded Future Inc, a closely held cybersecurity firm based near Boston, Massachusetts.

Myanmar citizens are following the lead of protesters in Belarus and elsewhere who have found creative ways around government Internet restrictions.

Protesters from some of those countries are now providing guidance and support to Myanmar, and online forums are offering tips on how its citizens can stay connected.

“In the history of Myanmar and all the coups they’ve experienced and all this political upheaval, it looks to be the first time the people really had this type of access to alternative platforms, and have used it to reach out to international organisations and other countries for help, ” said Charity Wright, cyber threat intelligence analyst at Recorded Future, who has been studying the impact of the crackdown on the Internet for the past month and a half.

The situation in Myanmar is evolving, as the government seeks to block different types of communication and citizens try new methods.

That means what’s working now to evade government restrictions may not work in the coming weeks, said Anissa Wozencraft, a Recorded Future analyst who worked with Wright on the research.

Brigadier-General Zaw Min Tun, a spokesman for the military junta, told reporters in the capital Naypyidaw on Monday that the military had “no plan to restore mobile data at this point because some people are using the Internet to instigate destructive acts”.

The search for alternate ways to communicate online followed a Feb 1 military coup and arrest of Aung San Suu Kyi and members of her civilian government.

The Internet was temporarily shut down entirely, and now coup leaders are cutting it off from 1am to 9am, according to Recorded Future and news reports from the country.

In the first 48 hours following the coup, some 1.4 million people across Myanmar downloaded the messaging app Bridgefy, according to Jorge Rios, the company’s chief executive officer.

Bridgefy allows users to send offline messages to others within a certain range by using a phone’s Bluetooth. It was used by protesters in Turkey.

By Feb 13, almost two weeks after the coup, Internet use in Myanmar dropped to 15% of its normal traffic, according to Recorded Future.

“Normally we don’t talk about VPN, we don’t talk about Tor, but since the coup we’ve been using them, ” the student said. “I think it is partly our generation, also partly because a lot of Burmese have been to foreign countries to get educated and they were exposed to such technology.” — Bloomberg 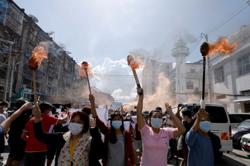