By Linda Lew and Mark Magnier

While the temperature was freezing in Anchorage, the exchange between Chinese and American top diplomats became heated during their first face-to-face meeting since US President Joe Biden took office.

Even during the Trump years, when relations between the two countries soured, rarely was there such a public display of contention, as the delegations traded snide remarks and accused each other of breaking protocols.

The Chinese delegates were jovial enough going into the afternoon meeting, with state councillor and Chinese Foreign Minister Wang Yi waving to journalists and asking Yang Jiechi, Communist Party Politburo member who is more senior than Wang, if he had had lunch. Yang said he had eaten instant noodles.

That came soon after their first meeting with US Secretary of State Antony Blinken and White House national security adviser Jake Sullivan, which ran for longer than expected as Yang went beyond his prepared script to hit back at the United States.

“Because, Mr Secretary and NSA Sullivan, you have delivered some quite different opening remarks, mine will be slightly different as well,” Yang said.

The meeting was supposed to kick off with two minutes for opening remarks, agreed to by both sides. But Blinken and Sullivan spoke for about 10 minutes.

Blinken raised the issues of Xinjiang, Hong Kong, Taiwan and accused China of carrying out cyberattacks on the US and economic coercion toward America’s allies.

Alaska summit turns civil after fiery start, but no room for hosted dinner

The Chinese delegation did not take well to Blinken and Sullivan’s opening salvo and hit back with a lengthy address almost 20 minutes long.

“I think we thought too well of the US. We thought the US side would follow the necessary diplomatic protocols. So for China it was necessary that we make our position clear,” Yang said at one point. 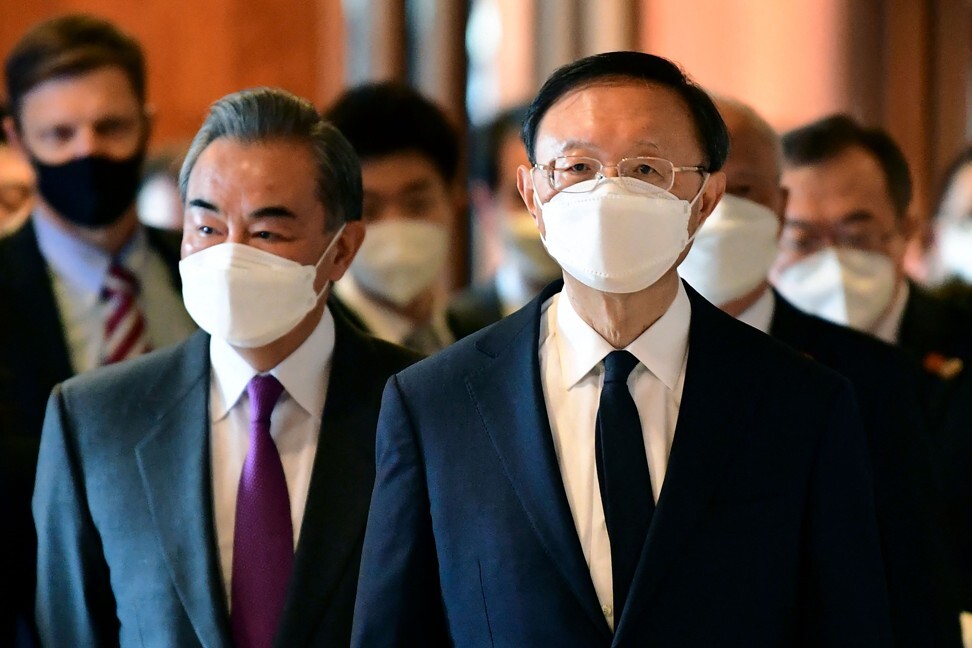 A tussle over the presence of journalists then ensued, turning what is usually a few minutes of opening remarks into an event lasting over an hour, according to press pool reports.

Handlers started to usher journalists out when Yang finished speaking but Blinken and Sullivan waved them back in to say more.

Blinken said he took from the Chinese comments satisfaction that the US was back and engaging in the world, but also deep concern. The United States “is not perfect” but has throughout its history dealt with its challenges openly, he said.

Sullivan added that America’s “secret sauce” was that it had looked hard at its own shortcomings and then worked to improve.

Once Blinken and Sullivan finished their comments, handlers again ushered reporters out but Yang told the press to “wait”, and raised a finger of admonishment. The Chinese diplomat accused the Americans of speaking to them in a condescending tone. He said the efforts to nudge the press out of the room was an example of how the US did not support democracy.

Afterwards, a senior US official speaking on background also accused the Chinese side of “violating protocol”, arriving intent on grandstanding and focusing on theatrics.

The public sparring followed days of posturing from the two countries, with Washington announcing this week it was imposing sanctions against Chinese officials because of Beijing’s overhaul of Hong Kong’s electoral system.

In the last high-level meeting between China and the US, occurring during the Trump administration in June last year, then-secretary of state Mike Pompeo spoke with Yang behind closed doors in Hawaii for around seven hours without showing the back and forth seen in Anchorage on Thursday.

Chinese social media users reacted to the diplomatic spat with humour, as a cartoon image depicting Chinese delegates as rabbits and the Americans as eagles, shouting and spitting at each other from across the room, went viral.