Teresa Cheng, Hong Kong's secretary for justice, speaks during a Bloomberg Television interview in Hong Kong, China, on Tuesday, March 9, 2021. Hong Kong's top legal official warned residents to steer clear of criticisms of the government that stray too far from the facts, as officials defend Beijing's plan to overhaul the city's elections. - Bloomberg

HONG KONG, March 9 (Bloomberg): Hong Kong’s top legal official warned residents to steer clear of criticisms of the government that stray too far from the facts, as officials defend Beijing’s plan to overhaul the city’s elections.

Hong Kong Justice Secretary Teresa Cheng said in an interview Tuesday that opinions were "no more than an utterance of no value” if the facts weren’t established. Cheng was answering a question about what kind of criticism would be legal in the former British colony as Beijing implements a range of legal changes including a national security law and the electoral overhaul.

"Some of the statements that are sometimes uttered, that we hear, are actually not based on facts, or perhaps oblivious of the facts that exist,” Cheng told Bloomberg Television. "And I think that is what one has to be very careful not to embark upon.”

@EngleTV asks Hong Kong Secretary of Justice Teresa Cheng on @BloombergTV."One must not use fake news and an opinion that is not fact-based," she says.

Officials in Beijing and Hong Kong are fanning out to defend the most significant changes to the city’s political system since its return to Chinese rule in 1997. 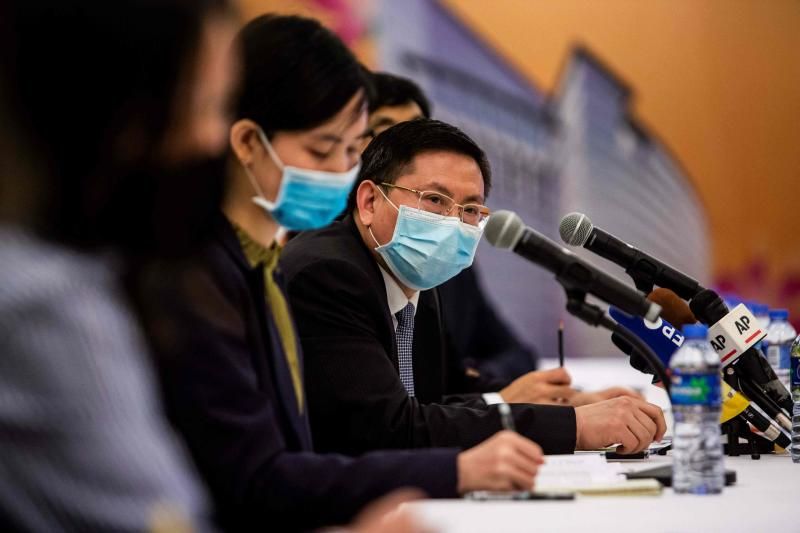 Hong Kong’s Deputy Commissioner of the Ministry of Foreign Affairs of the People’s Republic of China Song Ru’An (cenntre) speaks to international media during a press conference on Tuesday (March 9), about electoral system changes in Hong Kong to be introduced by Beijing. - AFP

Chinese lawmakers are expected to approve a sweeping electoral overhaul later this week that will require future candidates for elected office to be "patriots” and secure nominations from a pro-Beijing committee.

An official in China’s Foreign Ministry office in Hong Kong provided the clearest definition yet of what that quality entails, saying: "Patriots should respect the Chinese Communist Party.”

"Anyone who challenges the fundamental system of the state and undermines Hong Kong’s constitutional order does not count as a true patriot,” said Song Ru’an, a deputy commissioner in the office.

Beijing’s moves, including its imposition of a national security law on Hong Kong outlawing speech deemed subversive or secessionist, have been criticized by the US and UK as a violation of China’s treaty commitment to maintain the city’s "high degree of autonomy.” On Monday, a bipartisan group of US lawmakers, including Senators Ed Markey and Mitt Romney, called on the Biden administration to work with allies and partners to support the people of Hong Kong.

Cheng, who was among senior officials sanctioned by the U.S. Treasury in August on allegations of "undermining Hong Kong’s autonomy,” on Tuesday reiterated the government’s argument that the security law had restored stability. "Please look at the actual facts and then see what’s happening in Hong Kong,” she said in response to the lawmakers’ statement. 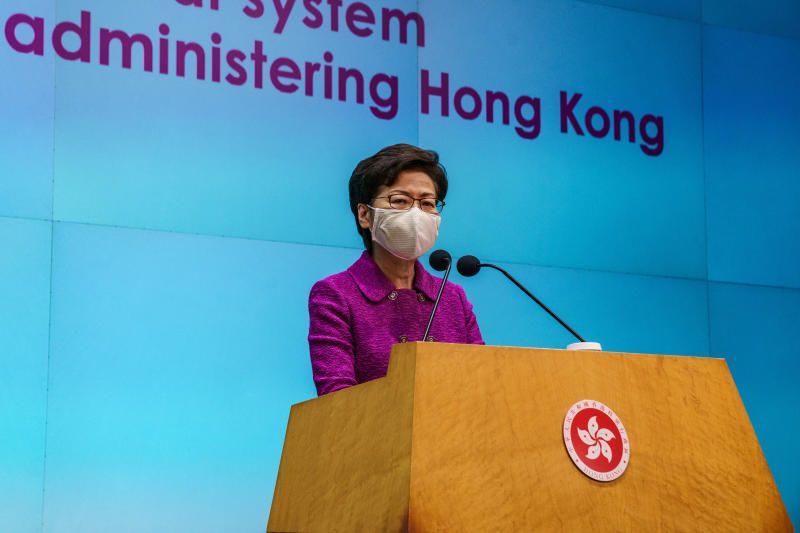 Carrie Lam, Hong Kong's chief executive, wears a protective mask while speaking during a news conference in Hong Kong, China, on Monday, March 8, 2021. China advanced sweeping plans to curb the role of opposition activists in Hong Kong elections, with local media reports saying a vote for the city’s legislature would be delayed another year to September 2022. - Bloomberg

Hong Kong authorities have so far arrested 100 people on allegations of violating the security law, with most accused of participating in some form of political activity, such as displaying banners or posting in support of the city’s independence. The total includes 47 opposition figures charged last week with "conspiracy to commit subversion” over their aborted "35-plus” election campaign last year to win a majority on the Legislative Council and force Chief Executive Carrie Lam to resign by voting down her budget.

The electoral overhaul would go further by making it harder to for such opposition politicians to seek and win office, effectively ending the only open elections under Beijing’s rule. Lam said Monday that the proposal being drafted behind closed doors in Beijing would be locally enacted without the usual public consultation process.

"The political structure is no longer ensuring the governance of the -- the efficacy of -- of the whole administration into a proper efficient way that serves the people in Hong Kong,” Cheng said. "And it is for that reason that the National People’s Congress sees the pressing need for that to be taken.”

Cheng, who sits on the security committee established by the law, declined to explain why "35-plus” campaign constituted subversion, saying she couldn’t comment on specific cases. "We should move away from this topic and talk about other things, because we cannot talk about a case,” Cheng said. 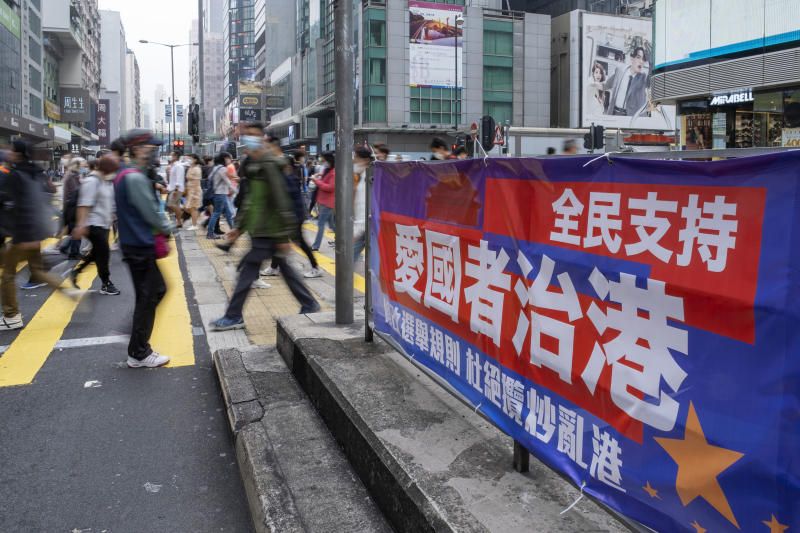 Pedestrians walk past a banner reading "The People Support Patriots Ruling Hong Kong" in the middle of a road in Hong Kong, China, on Saturday, March 6, 2021. - Bloomberg

She also rejected as "totally absurd” criticism that the national security law had undermined the independence of Hong Kong’s judiciary. "There is no threat on the judicial independence -- and I say it loud and clear and with confidence,” Cheng said.

In December, the Communist Party’s People Daily newspaper published a commentary warning that the government could transfer media tycoon Jimmy Lai’s foreign collusion case to mainland courts after a decision to grant him bail. Lai was later sent back to jail after Hong Kong’s highest court affirmed a higher standards for releasing security law suspects before trial.

The security law lets Cheng issue certificates requiring some cases to be tried without a jury, a power that local media including the South China Morning Post say she exercised to prosecute an activist accused of driving a motorcycle into a group of police officers in July. Cheng said the power would be "exercised independently and fairly and without any interference” and that a three-judge panel would uphold defendants’ rights.

"One talks about ‘no jury’ as if it’s something that is such a big, worrying thing,” Cheng said. "We’re going to write down the reasons, and the, and the findings of fact and the legal basis upon which the conclusion of the verdict -- be it convict or acquit -- is going to be.” - Bloomberg
Article type: metered
User Type: anonymous web
User Status:
Campaign ID: 46
Cxense type: free
User access status: 3