MANILA, March 1 (Reuters): Philippines, Indonesia and Singapore stocks climbed about 1% on Monday as bond markets ended last week on a calmer note and regional manufacturing activity indicated that a gradual recovery was still on track.

In Mumbai, shares climbed 1.2% after India's economy returned to growth in the December quarter and the country kicked off an expanded Covid-19 vaccination drive, with investors betting on a faster economic recovery.

A slew of data on Monday showed manufacturing activity in Indonesia and the Philippines was still in expansion territory while Japan figures showed the fastest growth in over two years.

Factory activity in China, though, missed forecasts in February as a spike in Covid-19 cases led to lockdowns in parts of the country.

"The big picture, supported by the latest figures, is that China's growth remains fairly robust," Capital Economics said after the China data, which came over the weekend.

The moves on Monday followed a wild ride last week that saw US 10-year bond yields peak at 1.61% before ending the week at 1.41%, easing pressure on Asia's debt markets and equity valuations.

"This is, for now, likely to be a modest wobble," analysts at HSBC wrote in a note, adding that "as long as Asian earnings remain strong and bond yields remain low, the outlook remains positive."

The rupiah dipped 0.3% to its lowest since early November. Indonesia's debt offers some of the highest real yields in emerging markets.

Barclays said in a note dollar demand, including for hedging, "is likely to remain elevated as market participants reduce risk," noting foreign investors sold 13.5 trillion rupiah worth of bonds last week, unwinding the bulk of 2021 purchases.

Meanwhile, Malaysian shares dipped 0.3% as glove makers, one of the biggest benefactors of the pandemic, fell sharply.

Top Glove Corp, the world's top disposable medical glove maker, announced plans on Friday to raise HK$14.95 billion through a secondary listing in Hong Kong, a move that CGS-CIMB said would dilute earnings per share and was avoidable given that earnings over the next year were expected to be strong.

Markets in South Korea and Taiwan were closed for a public holiday. - Reuters 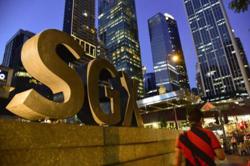