People mourn at the site where a young man died during a protest against the military coup, in Yangon, Myanmar, Sunday, Feb. 28, 2021. - AP

YANGON, Feb 28 (Bloomberg): At least nine people died as Myanmar’s military government cracked down on protests over the weekend, and escalated its intolerance for dissent with the ouster of the country’s representative to the United Nations along with the arrests of journalists and hundreds of demonstrators.

Four protesters were killed in the city of Dawei in southern Myanmar Sunday, military-run television station Myawady reported. An official at the Byamaso emergency clinic in Mandalay said two demonstrators died and at least eleven others were injured there. Three protesters also died in Yangon Sunday, a doctor with the CDM Doctors Network told Bloomberg News, declining to be identified for fear of retaliation.

Riot police arrested five journalists in Yangon, and an unknown number in Monywa and Hakha on Saturday for reporting on anti-coup protests, according to Myanmar Journalists Network. One of them is reported to be a photojournalist with the Associated Press, the Assistance Association for Political Prisoners, a rights group comprising former Burmese political prisoners said. 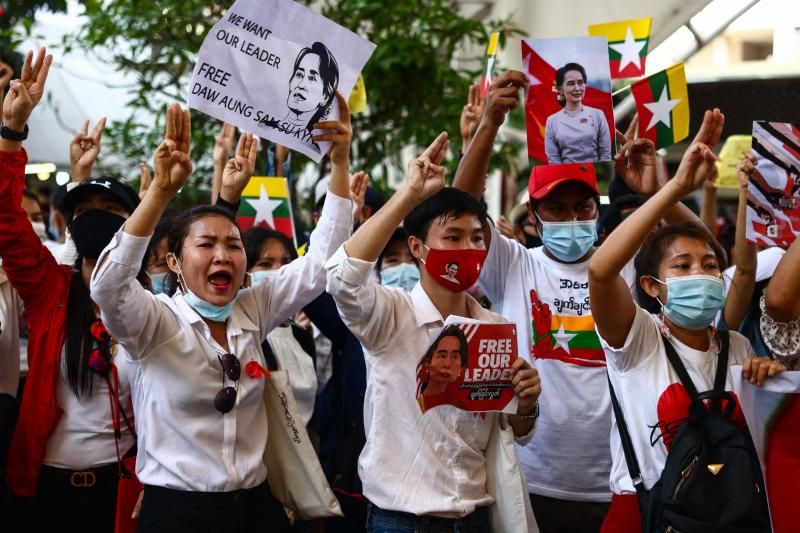 State-run MRTV reported riot police arrested 479 protesters across the country on Saturday, while Assistance Association for Political Prisoners said 854 demonstrators have been detained so far.

"The Myanmar security forces’ clear escalation in use of lethal force in multiple towns and cities across the country in response to mostly peaceful anti-coup protesters is outrageous and unacceptable, and must be immediately halted,” said Phil Robertson, Deputy Asia Director of Human Rights Watch. "Live ammunition should not be used to control or disperse protests and lethal force can only be used to protect life or prevent serious injury.”

The junta on Saturday fired Kyaw Moe Tun, Myanmar’s permanent representative to the UN, after he criticized the coup and defended deposed leader Aung San Suu Kyi. At an informal meeting in New York on Friday, Kyaw Moe Tun called on the international community to "take the strongest possible action” to reverse the Feb. 1 coup, stop the military from oppressing the Burmese people and return the country to democracy. "He failed to follow the state’s orders and instructions, committed treason, showed his loyalty” to the parliamentary committee led by Suu Kyi’s party, and "misused his authoritative powers as an ambassador of Myanmar,” the Ministry of Foreign Affairs said in a statement on Saturday.

The military’s power grab has triggered weeks of fierce protests within the country and sparked international condemnation. Hundreds of thousands of demonstrators have ignored bans on public gatherings, leading to occasional clashes with security forces that has left a handful of protesters dead. The Biden administration has announced sanctions targeting the country’s military leaders.

Most members of the 10-nation group have expressed a willingness to join, and the military-appointed foreign minister of Myanmar, an Asean member, has been asked to participate, according to Kyodo. Calls to Myanmar’s foreign ministry for comments on the meeting were unanswered.

Police in major cities including Yangon, Mandalay and Monywa on Saturday arrested protesters gathering on the streets. In some places, shots were fired and tear gas was deployed to disperse crowds, witnesses said. Suu Kyi was arrested in the coup and faces a possible prison sentence on charges of illegally importing walkie-talkies and violating Covid-19 restrictions while campaigning last year.

On Friday, Myanmar’s UN representative urged the international community not to accept the military regime, and called for recognition of the results of the November general election in which Suu Kyi’s National League for Democracy won a landslide victory.

Kyaw Moe Tun said, "all strongest possible measures to stop the violent and brutal acts committed by the security forces against peaceful demonstrators,” and an immediate end to the military coup were needed.

The National League for Democracy plans to put together a parallel government that could engage with the international community, the Financial Times reported, citing a party official who is on the run. - Bloomberg
Article type: free
User access status: