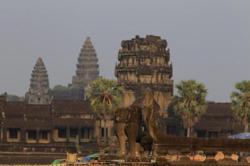 PHNOM PENH, Feb 27 (dpa): In case Cambodia's Angkorian temples, on the list of UNESCO World Heritage sites, aren't enough of a draw, there are plans in the works for a 75-hectare amusement park within walking distance.

Provisionally called "Angkor Lake of Wonder," the complex's first phase would include a water park, two 500-room, five-star hotels, a canal system, a "Chinatown" and an indoor "high-tech" theme park - all situated roughly 500 metres away from the world-famous temples.

NagaCorp wants to profit off the 5 million tourists who used to visit the historic site annually before the pandemic.

The site has been struggling recently amid the coronavirus pandemic, which has kept foreign tourists away from the early 12th-century Angkor Wat and its surrounding temples. The temple's managers turned to long-term tickets as part of an effort to draw in more visitors.

That initiative may be too optimistic, however. Even before the pandemic, the average length-of-stay for tourists had only grown from 5.4 days in 2013 to 6.4 days in 2018.

The resort would be an effort to keep tourists around Siem Reap longer, with plans to funnel tourists from there to NagaCorp's casino complex in Phnom Penh, to promote the "twin tourism icons of Cambodia."

NagaCorp also plans to re-create the canal system of ancient Angkor, the famous moat that surrounds Angkor Wat at the amusement park.

Angkor Wat is the most famous temple at the Angkor Archaeological Park, covering 400 square kilometres and including the remains of capitals of the Khmer Empire, dating from the 9th to 15th centuries.