Aisha Weddings encourages girls to marry early at the age from 12 as their duty is "to serve their husbands". - AISHA WEDDINGS

JAKARTA (The Straits Times/ANN): A wedding organiser promoting child marriage as well as unregistered marriage has created uproar in Indonesia.

Aisha Weddings encourages girls to marry early at the age from 12 as their duty is "to serve their husbands".

"You must depend on a man as early as possible for a stable and happy family. Don't be a burden for your parents, find a man earlier!" it said on its website, which says girls should marry between the ages of 12 to 21.

It has also warned parents about the challenge of preventing their children from sin, as they are exposed to sexual content prevalent in the media.

Assuming the role of matchmaker, the wedding organiser promises in a brochure to help parents find husbands for their daughters, to give them "a better life".

"Parents who want to seek husbands for their daughters please contact us. Send their pictures and biodata," it said.

"The content (of the website) is unsettling. Early marriage can affect the life of the children, such as depriving them of their rights to education, parenting and health," she told The Straits Times, adding that it would also be detrimental to the mental state and reproduction system of young women.

"This is also against our efforts to avert child marriage," Rita added.

The government has campaigned against child marriages, which are still common in the world's fourth populous nation of nearly 270 million people.

Indonesia has the eighth highest number of child marriages in the world, with one in nine women married before the age of 18, according to Unicef.

In the first half of last year alone, district and religious courts processed 34,413 applications from parents and guardians seeking legal permission to wed their children under the legal age, known locally as "marriage dispensation", according to the Women's Empowerment and Child Protection Ministry. Most applications were approved.

Apart from reporting the wedding organiser to the police, the KPAI also lodged a request to the Communication and Information Ministry to shut down the website and others that promote child marriage, Rita said.

In response to the commission's reports, Aisha Weddings said in a Facebook post: "Don't judge. If the parents are willing and the Religious Affairs Office issues the marriage dispensation for children, why get angry? Some families don't have money for their children. It's better to marry than die of hunger."

Women's Empowerment and Child Protection Minister Bintang Puspayoga also condemned Aisha Weddings' promotion of child marriage as running counter to the concerted efforts by the government to prevent the child marriage, especially in rural areas, on top of violating the law.

"Aisha Weddings has been unsettling not only for the government, but also the public, because it has influenced young minds that getting married is easy," she said in a statement.

Saying it negates the efforts to prevent children from being the object of violence and exploitation, Bintang added that the data of children sent to Aisha Weddings could make them a target for other crimes such as sexual and economic exploitation and trafficking.

"That's why we involve law enforcers to prevent children from being victimised," she said. 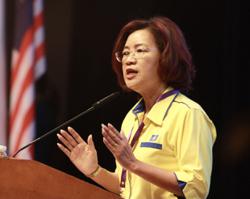