JAKARTA (The Jakarta Post): Indonesia is seeking to boost its currently limited syariah finance sector with the launch of Bank Syariah Indonesia (BSI) this week, the country’s largest syariah bank.

BSI, which was launched on Monday, is the result of a merger of three state-owned banks’ syariah subsidiaries, namely Bank Syariah Mandiri (BSM), BNI Syariah and publicly listed BRI Syariah.

The government expects the bank to serve some 15 million customers as it seeks to develop the country into a syariah finance hub.

“There are a lot of benefits of sharia banking that attract even those who are not Muslim. Among Muslim consumers themselves, I think as they get older, they want to comply with Islamic rules of finance, and they will switch to syariah banks. So the prospect of syariah banking is bright, ” he told The Jakarta Post on Tuesday.

For credit cards, for example, sharia banks do not apply a traditional interest rate system and instead impose a fee that is generally lower than that of conventional credit cards.

Although Indonesia is the world’s largest Muslim-majority country, syariah finance makes up just 9.9 per cent of the country’s total financial sector because of low demand attributed to low financial literacy and inclusion.

This growth stood in contrast to the 2.41 per cent contraction in loan disbursement recorded by the conventional financial sector, according to the Financial Services Authority (OJK).

Hans said this was because syariah banks had arrived much more recently than conventional banks. The number of clients of syariah banks would go up over time, he added.

“Most syariah banks that have done well during the pandemic are state-owned, and as such, they can choose their clients and borrowers, so they are less affected, ” Hans said, adding that syariah banks tended to be more prudent than regular banks with regard to loans.

With the formation of BSI, Hans said, syariah banking was poised for good performance, especially as BSI was one of the 10 largest banks in the country.

BSI is the seventh-largest bank in Indonesia by total assets, according to the bank’s director, Hery Gunardi.

As of December, BSI’s total assets stood at Rp 240 trillion, above his prior estimate of Rp 220 trillion to Rp 225 trillion.

Meanwhile, its total financing was Rp 157 trillion, and its third-party funds stood at Rp 210 trillion.

“Usually the bigger the bank, the better their business is, but we still need to wait for BSI’s development and their financial report to really predict the future performance, ” Hans said.

“We are focused on serving small and medium enterprises [SMEs], retail and consumers, as well as developing wholesale management with innovative products including global sukuk [sharia-compliant bonds], ” he said, adding that BSI’s infrastructure could also be used to optimise alms and waqf (Muslim religious trusts).

Hery previously said the bank aimed to be an underwriter for global sukuk of up to $300 million annually, Kontan reported.

He is also seeking to ensure that the bank will have total assets of Rp 390 trillion, disburse Rp 272 trillion in financing and collect Rp 335 trillion in funding by 2025, under a conservative growth projection.

“We are known as the world’s largest Muslim population, and that has become our global identity, which we are proud of. Therefore, it is only appropriate that Indonesia becomes one of the leading countries in the development of the sharia economy, ” he said in a speech on Monday.

Jokowi added that Indonesia’s syariah banks should be inclusive, welcoming clients from any religious background, and that they should serve the underbanked by leveraging digitalisation.

BSI also had to attract and be relevant to Indonesia’s younger generations, he said, and should create products catering to various segments, including retail, SMEs and corporations.

Institute for Development of Economics and Finance (Indef) executive director Tauhid Ahmad said that to appeal to the younger generation, syariah banks should cater to the growing demand for easy banking experiences, such as digital payments and investment products.

“They can also simplify syariah banking terms, which are usually in Arabic, so that more people can understand them. This is a new approach to attract consumers aside from the appeal that Muslims would opt for sharia-based finances, ” he told the Post in an interview on Monday.

There were still ample opportunities for syariah banks to compete with fintech firms to capture the SME market, Tauhid added, including by approaching the growing number of SMEs that sold Islamic and halal products. - The Jakarta Post/Asia News Network 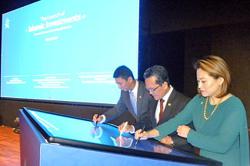