Passengers wearing face masks and face shields for protection against the coronavirus disease walking at a train station in Manila. The govt has announced that the total Cavid-19 cases in Philippines is now above 525,000, - Reuters

MANILA, Jan 31 (Reuters): At least 5.6 million Covid-19 doses of two international Covid-19 vaccines are expected to arrive in the Philippines in the first quarter of the year, the chief of the country's coronavirus task force said on Sunday.

The initial volume is part of the 9.4 million doses of the two vaccines - one developed by Pfizer Inc and BioNTech SE, the other by AstraZeneca PLC - that are expected to be shipped in the first half, said Carlito Galvez, who also handles the government's vaccine procurement.

Galvez said he has received a letter from Aurelia Nguyen, managing director of the World Health Organization-led COVAX Facility, informing the Philippine government of the shipment schedule and volume.

The vaccines are expected to arrive "within the first quarter of this year to jumpstart the country's national vaccination program as part of the global efforts to stop the spread of the coronavirus," he added.

"Today, we received a letter from Aurelia Nguyen, managing director of the World Health Organization-led COVAX facility, officially informing the Philippine government that the country stands to receive a total of 9,407,400 doses from the two pharmaceutical makers within the first and second quarters of this year," Galvez said in a statement.

Review committees from the WHO, UNICEF and the Geneva-based vaccine alliance GAVI granted the country the vaccines after the Philippines demonstrated its preparedness to receive them, he said.

The country's Food and Drug Administration has approved the emergency use of both brands.

The Philippines, with Southeast Asia's second-biggest Covid-19 outbreak at more than half a million infections and over 10,000 deaths, aims to start immunisations in February.

The country is to initially receive 117,000 doses of the Pfizer-BioNTech vaccine around midmonth, and 5.5 million to 9.3 million doses of the AstraZeneca brand, Galvez said.

The volumes though are "indicative since it all depends on the global supply", he said.

The government aims to secure 148 million doses, aiming to inoculate 70 million people this year, or two-thirds of the country's population. The Philippines has also secured 25 million doses of the vaccine developed by China's Sinovac Biotech, with the first 50,000 expected to arrive in February.

Meanwhile, the Department of Health (DOH) of the Philippines reported on Sunday 2,103 new Covid-19 cases, bringing the total number of confirmed cases in the South-East Asian country to 525,618.

The death toll climbed to 10,749 after 80 more patients died from the viral disease, the DOH said. It added 11,653 more patients had recovered, raising the total number of recoveries to 487,551.

The data showed that 83 health care workers had succumbed to the disease as at least 14,393 medical workers, mostly nurses, and physicians, contracted the virus.

The Philippines, with a population 110 million, has tested over 7.3 million people since the disease emerged in the country in January last year.

The Philippines' Food and Drug Administration has granted both Pfizer-BioNTech and AstraZeneca emergency use authorization.

He said the vaccines under COVAX will inoculate healthcare workers, medical-related personnel, and other frontliners. 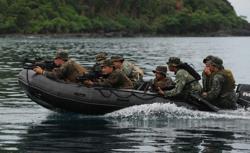