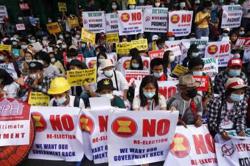 BANGKOK (The Nation/ANN): The House of Representatives voted on Wednesday (Jan 27) to remove kratom (mitragyna speciosa) from Thailand’s narcotics list and classify the herb as a controlled substance.

The draft Narcotics Act proposed by the Justice Ministry was passed by 319 votes to seven with three abstentions.

If approved by the Senate, the draft will be published in the Royal Gazette and become law within 90 days.

The Cabinet in March 2019 approved the plan to align the law with widespread consumption of kratom, especially by farmers and labourers in the South.

The draft allows production, import and export of kratom by those granted permission by the Narcotics Control Board.However, sale of kratom to people under 18 or pregnant women is prohibited, as is hiring or allowing people under 18 to sell kratom.

Violators face up to two years in jail and a maximum fine of Bt200,000.

Selling kratom in schools, dormitories, public parks, theme parks, or via online channels is prohibited and punishable with a fine of up to Bt40,000.

Advertising or marketing kratom is also prohibited and carries up to six months in jail and a maximum fine of Bt500,000. - The Nation/Asia News Network