BANGKOK (The Nation/ANN): Thai banks’ non-performing loans (NPLs) will rise significantly this year as Covid-19 continues to take a toll on the economy, experts say.

"However, we believe the bank will be able to deal with NPLs as most debtors have received the bank's assistance so far.”

She added that SCB would have to set up more reserves to cope with future uncertainty.

Naris Sathapholdeja, head of TMB Analytics, forecasts commercial banks' NPLs this year will rise by up to 15 per cent to Bt604 billion compared to Bt525 billion last year, with an NPL ratio of 3.6 per cent, up 12 per cent compared to 3.2 per cent last year.

"However, commercial banks' NPLs will not increase sharply because they have methods to manage NPLs, such as selling debts and debt restructuring," he said.

He forecasts that figure will rise 22 per cent in 2022 to Bt143 billion as Covid-19 recedes and the economy improves.

"The seven banks' NPLs this year will stand at 4.9 per cent compared to 4.2 per cent last year, while their reserves will increase to Bt209 billion compared to Bt199 billion last year," he predicted.

He advised investors to buy Bangkok Bank (BBL) shares at a target price of Bt146, Kasikornbank (KBANK) at Bt156 and SCB at Bt109, forecasting they would be traded at a price-to-book-value (P/BV) ratio of between 0.75 and 0.8 compared to 0.45 last year. - The Nation/Asia News Network 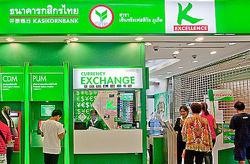