Diners separated by screen dividers at a street food corner in Bangkok on Jan 10, 2021.- AFP

BANGKOK (The Straits Times/ANN): Residents of six Thai provinces now need to obtain permits before they can leave their province. Restaurants in Bangkok must also stop serving dine-in patrons by 9pm.

Cinemas are shuttered, and massage parlours are once again dark and empty.

Thailand, battling its second wave of coronavirus infections, has imposed an array of restrictions that differ according to which provincial border you cross.

Anyone from Bangkok who heads to Ayutthaya one hour away, for example, would have to register on a contact tracing app and enter a 14-day home quarantine on arrival.

Trying to avoid the economic seizure that followed the nationwide lockdown in March last year, the government has studiously avoided blanket measures.

Instead, it tightened restrictions gradually, province by province, beginning from December when a cluster of infections was discovered in a shrimp market in Samut Sakhon province staffed by mostly migrant labour.

But this approach has unsettled some in the medical community, who warn that it puts Thailand at risk of repeated waves of infection later this year. This could put its economic recovery further out of reach.

"The government seems to have responded to the second wave slower and less effectively than it should have. A major reason is the fear of the economic impact from a national lockdown," epidemiologist Thira Woratanarat from Chulalongkorn University's Faculty of Medicine told The Straits Times.

"I have warned them to be careful because several countries that chose the flexible and economics-dominant strategy have later encountered severe (transmission) in their country and needed to impose national lockdowns with longer and more devastating economic impacts."

Kasem Prunratanamala, head of research at CGS-CIMB Securities, said: "The government has been quite reluctant to have a lockdown this time for fear of the economic impact that we saw last year. It also has less cash in its coffers to help those affected."

Mild restrictions could actually hurt the tourism industry, which used to contribute some 20 per cent to Thailand's gross domestic product directly and indirectly.

"Certain sectors, like hotel and tourism sectors, prefer a stricter lockdown so that the Covid-19 outbreak can be put under control more quickly. They fear that if the lockdown is not rigid enough, (local) tourism would be ruined for the main festive season during the Songkran period in April," he said.

"If the outbreak continues beyond the first half, it would destroy a quick rebound of foreign tourism in the second half."

But government spokesman Anucha Burapachaisri argues that a national lockdown is not necessary because the public knows how to protect itself from the Covid-19 virus now.

"We needed to be very strict the last time because people were not aware of how serious Covid-19 was. And we did not have enough medical supplies, like masks and alcohol gel," he told The Straits Times.

"This time, we believe the public is more informed about Covid-19. They are ready, in terms of wearing masks and avoiding congested places."

But the battle to contain the outbreak this time may be complicated by the fact that two key clusters involve migrant workers and illegal gamblers, who currently have little incentive to come forward for testing unless they become seriously ill.

Thailand hosts an estimated three to four million migrant workers from neighbouring countries such as Myanmar and Cambodia, many of them undocumented.

In an effort to reach and test everyone at risk, the Ministry of Labour announced an amnesty for undocumented workers, allowing them to register and stay on without any legal penalty.

The problem, says Mekong Migration Network regional coordinator Reiko Harima, is that jobless workers marooned in Thailand are too indebted to pay the roughly 9,000 baht (US$298) in related costs like health insurance.

Those with employers are likely to have their salary cut to make up what employers had to pay to register them, she said.

Reiko recommends that the amnesty scheme be made more flexible and free of charge.

"It might sound like it's too good to be implemented, but at the same time, we are seeing it as a necessity at this moment," she said.

"If the Thai government would like to implement its public health strategies effectively, it really does need everyone to come forward." - The Straits Times/Asia News Network 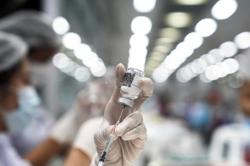