A hydropower station larger than the Three Gorges Dam has long been mooted for the Yarlung Tsangpo River. - Reuters

BEIJING (Bloomberg): China plans to exploit the hydropower resources of a Tibetan section of a river that is a key source of water to Bangladesh and India, the Global Times reported.

China's next five-year plan calls for developing hydropower on the Yarlung Tsangpo River, Yan Zhiyong, chairman of Power Construction Corp of China, the state giant known as PowerChina, said at a conference on Thursday (Nov 26), the Global Times reported, citing a WeChat account of the Central Committee of the Communist Youth League of China.

The river eventually becomes the Brahmaputra and then the Meghna, which are important for irrigation and have religious significance in India and Bangladesh.

PowerChina didn't immediately respond to a faxed request for comment.

A hydropower station even larger than the Three Gorges Dam has long been mooted for the Yarlung Tsangpo, although analysts have been skeptical because of the cost of getting materials and workers to the site.

Exploiting the river's hydropower resources could provide 300 billion kilowatt-hours of carbon-free electricity a year to China, Yan said, according to the report.

That would be about 4 per cent of the country's total demand last year. 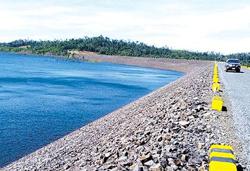