Indonesian police said that they have arrested seven terrorist suspects in the country’s eastern province of Gorontalo.

“It is true that suspected terrorists have been arrested, ” he said, as reported by local news outlet Kompas.com.Cahyono also said the suspects had been transferred to the National Police’s headquarters for interrogation. The suspected militants were accused of killing four people, said by rights groups to be Christians, beheading one and burning down their homes.

Ten militants linked to a “terrorist” group beheaded one victim and slit the throats of the others on the island of Sulawesi on Friday, national police spokesman Awi Setiyono quoted a witness as saying.

Speaking to the news channel Metro TV, Awi did not explain the alleged attackers’ motivation.

He also did not respond to requests for comment.

“This attack is another serious escalation against the Christian minority in Indonesia, ” Human Rights Watch researcher Andreas Harsono said.

Gomar Gultom, the head of the Communion of Churches in Indonesia, said the victims were Christians and urged the authorities to resolve the case.

International Christian Concern, a Washington-based advocacy group, posted on its website on Friday that “an alleged terrorist” killed four Christians in the Sulawesi village, burning down a Salvation Army post and Christian homes. — Xinhua/Reuters 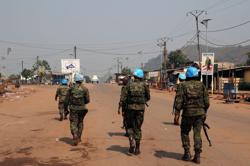