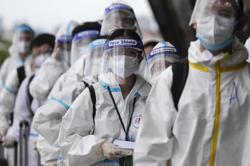 Seoul: South Korea reported its highest daily number of Covid-19 cases since March, with a surge of new infections sparking fears of a major third wave.

Officials announced 583 new cases after several weeks of fresh infections yesterday, ranging between around 100 and 300.

The latest cases have mostly been clusters discovered at offices, schools, gyms and small gatherings in the greater Seoul area, the Korea Disease Control and Prevention Agency said.

New cases also emerged within the military, including dozens of newly enlisted soldiers at a boot camp – prompting the defence ministry to bolster its virus measures.

“We are now in a situation where virus outbreaks can happen at any place, ” health minister Park Neung-hoo said.

The government tightened social distancing rules in Seoul and surrounding regions this week as authorities scrambled to contain the spread of the virus.

The measures include closing nightclubs and bars and restricting the number of visitors at weddings and funerals to 100 people.

Cafes are only allowed to serve takeaways and all restaurants must close by 9pm, with only deliveries permitted afterwards.

Yesterday’s figures take the total number of recorded cases in the country to more than 32,000.

South Korea endured one of the worst early Covid-19 outbreaks outside mainland China, but brought it broadly under control with its “trace, test and treat” approach.

Seoul never imposed the kind of lockdowns ordered in much of Europe and other parts of the world.

The country has previously been held up as a model of how to combat the pandemic, including by the World Health Organisation.

The public have largely followed social distancing and other rules, such as wearing face masks. — AFP