The gradual retirement age extension is expected to prevent abrupt interruptions in the labour market and maintain political and social stability. - VN/ANN

HANOI (Vietnam News/ANN): Starting next year, the retirement age will be increased to 60 years and three months for men and 55 years and four months for women.

This is part of Government Decree No. 135/2020/ND-CP, applicable from Jan 1,2021, following the approval of the revised Labour Code by the National Assembly last year after lengthy debates.

At present, the retirement age for regular labourers is 60 for men and 55 for women.

People who do heavy, hazardous or dangerous work or employees working in a place with harsh living conditions can retire at 55 for men and 50 for women. High-skilled workers work until 65 for men and 60 for women.

The increase in retirement ages is an important part of the revised Labour Code.

According to the decree, after 2021, the retirement age will increase by three months per year for men and four months for women.

People working in dangerous environments or doing heavy lifting can retire sooner, while those who work in the private sector or in highly-skilled jobs can retire later, with the maximum extension five years.

For example, people with at least 15 years working in heavy, hazardous or dangerous jobs can retire up to five years earlier than the common retirement age.

A similar incentive is applied for people working in remote disadvantaged areas or people who have lost at least 61 per cent of their working ability.

Meanwhile, after retirement ages, people can continue working if they reach an agreement with their employers.

Last year, Vietnam's population was 96.2 million and may rise to 97.3 million this year, according to the General Statistics Office.

The gradual retirement age extension is expected to prevent abrupt interruptions in the labour market and maintain political and social stability. It also aligns with Vietnamese workers’ life expectancy. 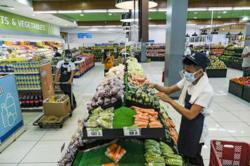