HONG KONG (China Daily/ANN): The Hong Kong government will empower doctors to mandate Covid-19 tests for suspected virus patients but has no plans, as of now, of conducting mandatory universal testing.

Chief Executive Carrie Lam Cheng Yuet-ngor said on Wednesday that mandatory universal testing is impractical as it would mean imposing a lockdown on the entire city to ensure its effectiveness.

Lam made the remarks during a press conference on her Policy Address when asked about the possibility of the government implementing large-scale universal community testing again in a bid to achieve the target of zero infections.

“What the Policy Address said is we do not rule out -- because the pandemic situation is changing very rapidly -- that in future we may have to do a wider universal testing like what we did previously, ” Lam said.

“But at the moment, we do not have that plan yet because that would not be very effective, especially under the present circumstances when we have other priority groups that we need to tackle, ” she added.

The Chief Executive pointed out that the practicability of testing all seven million people in Hong Kong had to be considered.

“In recent days, I noticed a lot of people advocating -- just like a slogan -- that we should have a mandatory universal testing of everyone in Hong Kong. We have to look at the practicality of doing so, ” Lam said.

“If I go through a test today, there is no point if I am allowed to go out, to go to work, to go to a restaurant, ” she said.

“So arrangements have to be put in place to lock me down at home for a long period when everybody, when the seven million people have to go through the test. You could imagine that would require locking down the whole city ie no in, no out, ” she added.

Lam questioned whether it would be feasible to ask the whole city to be locked down during the testing period.

“Last time we did it within two weeks, with hundreds of laboratory technicians and over 100 centres testing 1.7 million people, ” Lam said.

“If we are going to test seven million people, assuming that we are doubly effective, that would still be four weeks instead of two weeks, ” she said.

“Can Hong Kong survive with a city lockdown of four weeks? Can you, as an individual, tolerate a stay home mandatory order for four weeks?” she added. - China Daily/Asia News Network 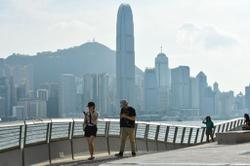