THE authorities have investigated 37 people and deported 16 foreigners as part of intensified security efforts in the wake of terror attacks in France and elsewhere.

The 14 Singaporeans and 23 foreigners investigated had attracted the authorities’ attention for suspected radical inclinations, or for making comments which incite violence or stoke communal unrest.

In particular, the majority had supported the beheading of French teacher Samuel Paty and the subsequent attacks in France and elsewhere, said the MHA.

They had also incited violence against France or French President Emmanuel Macron in retaliation for the French government’s defence of the Charlie Hebdo cartoons. A few had made derogatory remarks against Muslims, said the MHA.

The 16 foreigners – 15 Bangladeshis and one Malaysian – were repatriated after the Internal Security Department completed investigations on them.

The Malaysian was found to be radicalised and intended to travel to Syria to partake in armed violence.

Most of the 15 Bangladeshis were working in the construction industry. The MHA said they had, in response to the recent terror attacks in France, made social media posts which incited violence or stoked communal unrest.

“Investigations into the remaining seven foreigners are still ongoing, ” said the ministry.

It added that while a handful of those investigated had commented on the same discussion threads on social media, the majority of cases are not connected to each other.

“To date, there is no indication that any of these individuals had been planning any attacks or protests in Singapore, ” said the MHA.

Meanwhile, investigations are ongoing into the 14 Singaporeans – 10 men and four women aged between 19 and 62 years old.

Speaking at a Religious Rehabilitation Group seminar yesterday, Minister for Home Affairs and Law K. Shanmugam said while both Singapore and France are secular, with both guaranteeing freedom of religion, the approaches taken are different.

“France says they prefer to achieve it by taking a hands-off approach, we are interventionist. We intervene. Because we take the position that the right to speak freely goes with the duty to act responsibly. The two must go together.

“As a secular government, we are neutral in treatment of all religions. But we also do not allow any religious group to be attacked or insulted by anybody else, whether majority or minority – same rules, ” he told the audience at the Khadijah Mosque in Geylang.

Singapore also guarantees the freedom of religion – the right of anyone to practise their religious beliefs, and the country protects everyone from any threats, hate speech, or violence, he said.

“That is the assurance one gets in Singapore. It’s also what we need to do to preserve racial and religious harmony in Singapore.

“And therefore the Charlie Hebdo-type of cartoons will not be allowed in Singapore, whether it’s about Catholicism, Protestants, or Islam or Hindus, ” added the minister. — The Straits Times/ANN 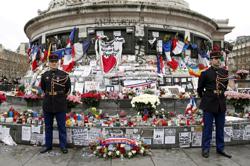