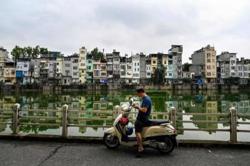 THE country’s fragrant noodle dishes and fresh spring rolls have won fans across the globe, but mounting food safety scandals on the country’s streets are sparking a rising tide of anxiety among millennials about what they eat.

“About two hours after lunch, I started vomiting,” she said.

Rushed to hospital by her husband, doctors told her it was food poisoning.

Lan did not eat out for a month after that, and frequent food scandals have only worsened fears.

In July, 14 people were taken to hospital in severe condition after being poisoned by vegan pate.

There is also a growing unease about high pesticide use for vegetables and herbs thrown in typical street food dishes.

Some 70% of 16 to 30-year-olds said food safety was their biggest concern – ranking the same as job security – when polled by the British Council in Vietnam this year.

“Banned pesticides are being used, the environment is polluted and agricultural products are being sent back after being shipped abroad,” he told state media.

Across the country, Vietnamese are doing what they can to ensure that they eat safely.

Le Thi Thanh Thuy, 69, grows lettuce, morning glory and over a dozen other vegetables on her roof in western Hanoi.

“The vegetables are enough for my family,” she said, adding that she spends up to two hours per day tending to her crop.Ngo Xuan Quyet, 26, used to sell pesticides before switching to “safe” farming.

With the help of safe food policy NGO Rikolto, he tries to ensure that his lettuce, spring onions and herbs – grown with a strictly controlled dose of pesticides – make it into as many bowls of bun cha as possible.

For Quyet, the dream is to guarantee quality produce everywhere – from the local wet market to the cheap food stalls on the street corner. — AFP