The destruction of two US-funded buildings at the country's Ream Naval Base, as shown in satellite images last month from the Centre for Strategic and International Studies, has reignited speculation about the site.

The issue has also been seized on by members of the Cambodian opposition, who on Friday urged supporters to protests against China's influence in the country. This appeared to prompt today's response from Hun Sen.

"There are Chinese investors and technical experts here, but where is the Chinese armed personnel?" Hun Sen said at a ceremony for a new bridge in Phnom Penh, according to state outlet Agence Kampuchea Presse.

"Where are the Chinese troops in Cambodia to be expelled? Please show the evidence," he said.

The comments come after reports that Ream Naval Base is slated to host Chinese military assets. The Wall Street Journal reported last year the countries had signed a secret deal to allow Chinese forces to access the site on the Gulf of Thailand. 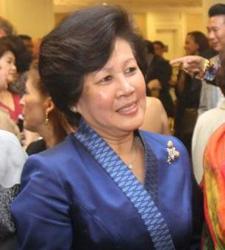