A filepic of teenager Tony Chung in Hong Kong. Chung, 19, who was among the first arrested under Beijing's new national security law, was detained on Tuesday (Oct 27, 2020) close to the US consulate, local media and activists reported. - AFP

HONG KONG, Oct 27 (AFP): A young Hong Kong activist who was among the first arrested under Beijing's new national security law was detained on Tuesday close to the US consulate, police and local media said.

Tony Chung, 19, was led away from a coffee shop opposite the consulate by unidentified men, the South China Morning Post reported, citing a staff reporter who witnessed events.

Student Localism, a pro-independence group that Chung was once involved in before the security law was passed, said he and two other former members were arrested on Tuesday.

Police later confirmed the three arrests, saying they were linked to an ongoing investigation into the group allegedly "inciting secession", one of the new national security offences.

All three were first arrested for that offence in late July but released on bail.

A previously unknown group calling itself "Friends of Hong Kong" first alerted media to Chung's arrest on Tuesday morning by issuing a statement saying its members had been trying to arrange for him to make an asylum application via the US consulate.

"Our plan was for him to enter the consulate office today," a member of the group, who asked not to be named, told AFP.

AFP was not able to independently verify the group's claim that it was helping Chung make an asylum application.

Its statement said members witnessed four men walk into the coffee shop opposite the consulate at 8:15 am and detain Chung.

Dashcam footage obtained by AFP from a car parked opposite the building at that time showed three men wearing surgical masks escorting another man in a dark t-shirt who appears to have his hands behind his back.

The Friends of Hong Kong member told AFP the clothes worn by the escorted man matched what Chung was wearing that morning.

The US consulate did not respond to enquiries seeking information.

Critics say its broad wording criminalises a wide array of political speech and views, including calling for independence or greater autonomy for Hong Kong.

The security law also allows China's security agents to operate openly in Hong Kong, unbound by local laws. They operate out of a recently requisitioned hotel.

Chung was the first public figure to be arrested under the law. He and three others, including a 16-year-old, were arrested for allegedly "inciting secession" via social media posts.

There are banned from leaving Hong Kong while the investigation remains ongoing.

Student Localism says its Hong Kong chapter disbanded before the security law was enacted and that its activists are now based abroad.

As Beijing cracks down on its critics in the financial hub, a small but growing number of Hong Kongers have made asylum claims overseas. 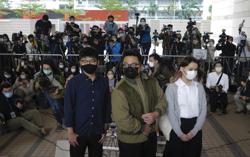