Pompeo in India for talks; all set to sign defence pact

Secretary of State Mike Pompeo, and his wife Susan disembark from an aircraft upon their arrival at the airport in New Delhi, India, Monday, Oct 26, 2020. - AP

NEW DELHI, Oct 26 (AFP): US Secretary of State Mike Pompeo arrived in New Delhi on Monday, kicking off a four-country Asia tour that he has said will focus on the "threats" posed by China.

Joined by Defence Secretary Mark Esper for the two-day visit, Pompeo will hold top-level talks following a spike in tensions between India and China since a deadly border clash in June.

India has sought US cold weather equipment as the showdown goes into the freezing Himalayan winter and officials said this could be raised when Pompeo and Esper meet India's External Affairs Minister Subrahmanyam Jaishankar and Defence Minister Rajnath Singh.

The world's two biggest democracies are expected to sign an agreement on sharing geo-spatial intelligence, paving the way for the United States to ship sophisticated missile technology, officials said.

Esper will also be discussing ways to increase cooperation between the two countries' military forces.

This could include intelligence sharing, stepping up joint exercises, and arms sales -- including possibly US F-18 fighter jets.

Pompeo will go on from India to Sri Lanka, the Maldives and Indonesia, all of which have a key role in Indian Ocean maritime traffic where China has cast a greater shadow.

The secretary of state said ahead of the trip that his meetings would "include discussions on how free nations can work together to thwart threats posed by the Chinese Communist Party".

Bloomberg said the discussions are taking place barely a week before presidential elections in the US and at a time when india, a member of the informal four-nation Quad grouping along with America, Japan and Australia, is in talks to de-escalate military tensions with Beijing.

On Tuesday, India is expected to announce the signing of the Basic Exchange and Cooperation Agreement, which will give it access to the U.S.’ geo-spatial intelligence inputs to help improve the accuracy of automated hardware systems, missiles and drones, according to senior administration officials. 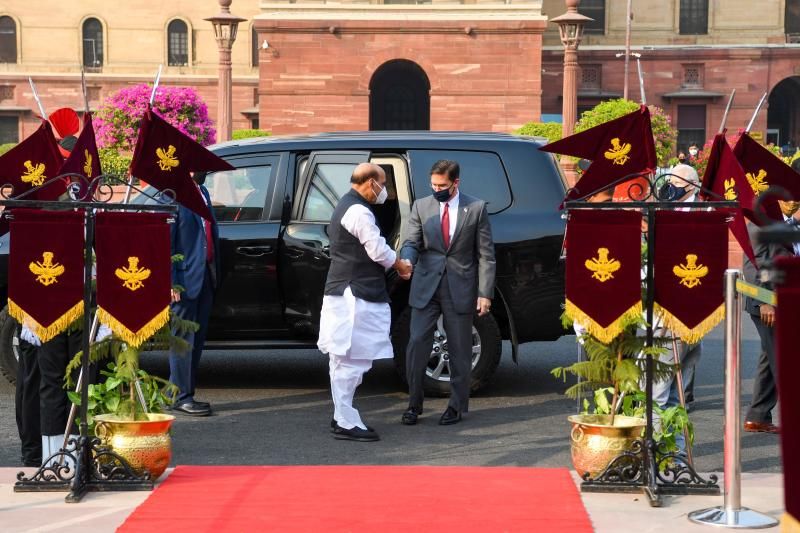 US Secretary of Defence Mark Esper is greeted by his Indian counterpart Rajnath Singh as he arrives for a ceremonial reception at ministry of defence in New Delhi on Monday, Oct 26, 2020. - AP

The talks are also set to further boost India’s defence purchases from the US, currently at US$20 billion, and help address its security concerns in the Indian Ocean region as it seeks to compete with China, which has an economy that is about five times larger.

"South Asia and the indian Ocean is india’s primary strategic theater, and India’s domain of influence,” said Bec Strating, a senior lecturer in politics and international relations at Melbourne’s La Trobe University. "india is likely to want to maintain its influence in the indian Ocean and South Asia, manage relations with U.S. and PRC to its advantage, and maintain its own strategic autonomy.”

Pompeo will also travel to the Maldives, Sri Lanka and Indonesia later in the week as part of the US push to counter Chinese influence in Asia.

His visit will help ensure relations between the two nations "don’t lose momentum” during the transition period until a new administration is sworn in early next year, said Tanvi Madan, a senior fellow at the Washington-based Brookings Institution. "This is also a way of showing solidarity with india at a time when there is bipartisan support for its conflict with China.”

The US has been increasingly concerned about China expanding its influence in the region through infrastructure and security investments in smaller neighbors. Beijing committed US$126 billion in Central and South Asia between 2000-2017, of which US$120 billion was for infrastructure, according to Virginia-based AidData.

In comparison, India spent $2.86 billion on aid to six of its neighbours over four years ending 2018, according to figures provided to the nation’s parliament and reported by the Economic Times.

"Secretary Pompeo’s visit to Sri Lanka, Maldives and Indonesia is a sign that the Indo-Pacific is being elevated as a region,” said Madan, author of the book "Fateful Triangle: How China Shaped US-india Relations during the Cold War.”

Traditionally wary of both Chinese and American influence in its neighborhood, india has become more comfortable with outreach by friendly nations.

The South Asian nation has shown a willingness to build trade and strategic networks with partner nations, lending its support to the U.S.-Maldives defense pact and agreeing to Australia joining the Malabar naval exercises this year despite China’s reservations.

New Delhi is also working with Japan and Australia as the U.S. pushes to build an Economic Prosperity Network to reduce economic dependence on Chinese supply chains in a post-Covid world.

While Beijing is "certainly growing its influence in Bangladesh, Sri Lanka, and Maldives, these countries clearly prioritize their relationships with india over China,” said Derek Grossman, Washington-based analyst with the RAND Corporation. The US is working with india to "build a more attractive alternative for these countries to work with in the future.” - AFP/Bloomberg
Article type: metered
User Type: anonymous web
User Status:
Campaign ID: 1
Cxense type: free
User access status: 3
Subscribe now to our Premium Plan for an ad-free and unlimited reading experience!