The royal motorcade carrying Thailand's Queen Suthida and Prince Dipangkorn drives past a group of anti-government demonstrators in front of Government House, on the 47th anniversary of the 1973 student uprising, in Bangkok, Thailand Oct 14, 2020. - Reuters

When Queen Suthida's motorcade slowed as it encountered a few dozen protesters jeering outside Bangkok's Government House on Oc. 14, royalists denounced it as unforgivable harassment in a kingdom whose constitution demands reverence for the monarchy.

The government, led by a former army chief who was the initial target of months of protests, responded swiftly.

It banned protests and made dozens of arrests. But that spurred more demonstrations - and much greater criticism of a monarchy that protesters say has helped to enable decades of military domination.

At a time when King Maha Vajiralongkorn has faced unprecedented scrutiny, many Thais have questioned why the queen was on that road at that time, and have challenged the severity of the reaction - which also included three arrests on little-used charges that could carry the death penalty.

The opposition Move Forward party said on Thursday it planned a parliamentary motion "to study the mistakes made over the motorcade", complaining this had led to severe action being taken, specifically citing the use of Article 110 charges of violence or attempted violence against the queen.

"It shows a failure in the setting of the royal motorcade route," said party spokesman Wiroj Lakkhanaadisorn.

Other people noted the route was not the shortest between the Dusit Palace, where the king and queen reside, and the temple where Suthida was going.

They also asked why the motorcade had moved so slowly, even at points where there was no evident obstruction. Royal vehicles usually move much faster.

Some Thais have raised questions whether the encounter was used to justify a crackdown. Reuters has no evidence to confirm this.

The royal motorcade carrying Thailand's Queen Suthida and Prince Dipangkorn drives past a group of anti-government demonstrators in front of Government House, on the 47th anniversary of the 1973 student uprising, in Bangkok, Thailand October 14, 2020, in this still image obtained from a social media video. Footage taken October 14, 2020. Reuters

The Palace declined comment, as it has since the start of three months of protests that at first called for the removal of Prime Minister Prayuth Chan-O-Cha, a former army chief, but then broke a decades-old taboo by demanding royal reform.

"The emergency declaration was necessary to prevent other incidents and conflicts," he said, rejecting protesters' accusations that it was a provocation to justify harsh measures.

Police did not respond to repeated Reuters requests for comment.

Reuters has reviewed nine videos supplied by the people who shot them and taken from different angles in addition to other video on social media, well over 100 still pictures with accompanying metadata and interviewed eight eyewitnesses to reconstruct how events unfolded.

There are gaps. Reuters was unable to establish the full route of the motorcade before and after the incident, why it was taken, why there had been no advance notice of the route or why the royal convoy travelled much more slowly than usual.

The incident started when Queen Suthida reached the protesters at around 5:22 pm on Oct. 14.

Suthida was on a rare visit from Europe, where she and the king had spent nearly the entire year before arriving in Bangkok on Oct. 10.

Dressed in a light blue silk dress with a gold sash, she was travelling on royal duties with the king's 15-year-old son, and potential heir, Dipangkorn Rasmijoti, who wore his white dress uniform, replete with gold braid.

The protesters were outside Prayuth's office at Government House. Prayuth seized power in a 2014 coup and protesters accuse him of engineering an election last year to keep his hold - an accusation he denies. 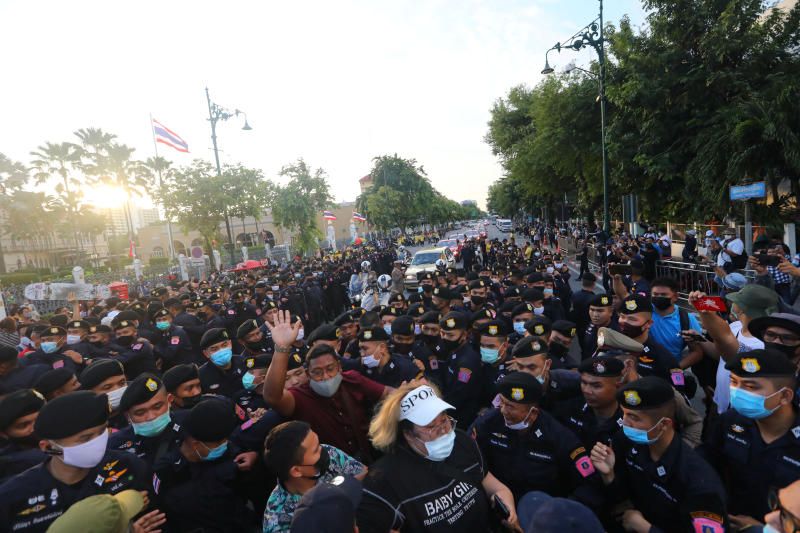 Most of tens of thousands of protesters were behind police blockades nearly a kilometre away, but a few dozen had made it to the gates and were milling around, outnumbered by police, who were lined up 20 abreast on the road.

Usually, police close roads in advance for royal motorcades, but this time it was only the appearance of the lead car and motorcycle outriders that heralded what was coming - minutes before it did.

"There was no announcement," said Pravit Rojanaphruk, a reporter from Khaosod English, who was interviewing protesters at the time. Video footage supports the assertion the usual warning was not given.

Protesters scrambled as motorcycle outriders arrived. Recognising a royal car, arms shot up to give the three-finger pro-democracy salute taken from "The Hunger Games." Others raised phones to take pictures.

The queen's limousine slowed to a stop as police pushed back protesters at both sides. It took nearly a minute, as some were dragged off. Pictures show them clinging to the legs of police officers as they tumble down near the Chamai Maru-chet bridge.

Protesters were held behind several lines of police. At some points, they appeared to get within metres of the car, though always behind police and none appeared to be trying to reach it.

The queen, who holds the rank of general and is a deputy commander of the Royal Security Command, can be seen smiling and waving to people.

"Some pictures made it look like we harassed them, when it was them that drove right into our gathering," said one protester who gave her name only as Vitita.

A royalist group, the Center for the Protection of the Monarchy, said its members helped police keep control.

"We risked 20 lives to prevent the mob that surrounded the royal motorcade with all our strength and shouted 'Long live the King' to muffle the mob," the group said in a statement.

Some yellow-shirted royalists can be seen with police in the video, but Reuters could not confirm the group's claims.

About 280 metres on from the bridge, another group of protesters stood behind police and royalists.

Video shows someone throwing what appears to be a bottle from deep in the crowd. It is unclear if it hit the car as police jogged on either side. Moving at about 7 km (4 miles) an hour, the convoy passed the last protesters at around 5.27 p.m.

That evening, the daily royal news programme showed the queen arriving at the Wat Ratcha Orasaram Ratchaworawihan temple at 5.51 p.m. presenting saffron robes to monks. Later, she was shown handing out awards to kneeling subjects.

But three sources, who did not want to be named because of the sensitivity, said the Palace was angered by the fracas - that was something unheard of in decades.

Just after 4am the next day, state television announced emergency measures citing illegal public assemblies and said people had "acted to affect the royal motorcade and committed severe actions that affected national security."

All political meetings of five or more people were banned. So was news that could affect national security. 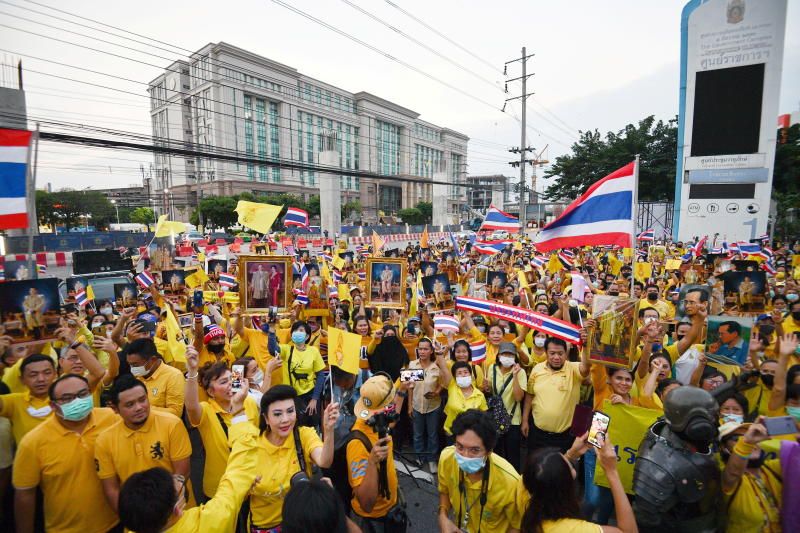 Within minutes of the announcement riot police rushed protesters outside the prime minister's office. At least 20 people were arrested - including lawyer Arnon Nampa, the first person to have openly called for royal reform on Aug 3.

Arnon could not be reached for comment as he remained in prison.

The response from protesters on social media was immediate. The top trending hashtag on Twitter in Thailand, used more than 1.1 million times, translates as #KingSlandersPeople - as people said they thought the incident was being used unfairly to justify harsh measures against protesters.

At least 81 arrests have been made since the emergency decree, police said. Protests happened daily, some drawing tens of thousands of people, before emergency measures were lifted on Oct. 22.

On Oct 16, two activists were arrested on charges of violence against the queen, which can carry a death sentence if the queen's life is thought to have been endangered.

Both Bunkueanun 'Francis' Paothong and Ekachai Hongkangwan can be seen in videos taken at the scene just before the queen's car arrived and among protesters pushed back by police.

Now out on bail, Bunkueanun, 20, told Reuters: "Everything went very quickly in a matter of minutes. Protesters started to push in to form a wall. Then the police moved at us to clear the road."

He said when he realised a royal motorcade was coming, he used a small megaphone to tell people to stand clear. He said he flashed the salute, but then pulled back from the crowd as he suddenly felt unwell. "I could not breathe properly and I almost fainted."

In a video posted on Facebook by Ekachai before his arrest, he can be heard saying: "It's a royal motorcade. Show three fingers." But the video did not show him attempt to get closer to the car. Reuters was unable to reach Ekachai or his lawyers for comment.

Each denied the charges under Article 110, which outlaws violence or attempted violence "against the queen or her liberty" and is even tougher than royal insult laws.

A third activist, Suranat Paenprasert, was arrested on Oct. 21 on the same charges. He has so far been denied bail. His lawyer, Poonsuk Poonsukcharoen, said he was accused of persuading other protesters to block the motorcade, but that none of them had realised what was going on. 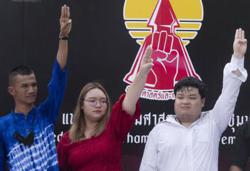