UNITED NATIONS (Xinhua): UN Secretary-General Antonio Guterres on Wednesday (Oct 21)expressed concern about intensified geopolitical competition in Southeast Asia and beyond, which, he said, has led to a deepening of global divisions with the risk of miscalculation, confrontation or even a new Cold War.

Speaking at an annual ministerial meeting between the Association of Southeast Asian Nations (Asean) and the United Nations, Guterres welcomed Asean members' support of his appeal for a global cease-fire and looked forward to their further advocacy to help end hostilities around the world, including ongoing conflicts within the ASEAN region.

In the South China Sea, increasing tensions require dialogue and for all actors to refrain from any escalation, he said.

On the Korean Peninsula, Asean foreign ministers have an important role to play in calling for the parties, especially the Democratic People's Republic of Korea, to continue what was started. The United Nations stands ready to support the process and key parties in their efforts, he said.

Regarding Myanmar, Rohingya and other communities continue to be displaced from Rakhine State as well as other parts of the country, and their misery remains acute, he said.

He reiterated the need to address the root causes of the crisis and to create the necessary conditions for the voluntary repatriation of refugees in safety and dignity.

Beyond solutions for the immediate humanitarian suffering, accountability is an imperative for long-term reconciliation, he said.

He thanked Asean members for their firm commitment to multilateralism and the principles of the UN Charter, and thanked their contribution of around 5,000 peacekeepers to 10 UN peace operations.

"At this time of global challenge and uncertainty, regional partners remain indispensable allies," he said. 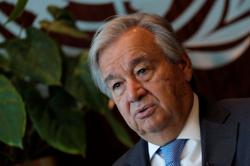