HONG KONG (AFP): Asian markets rose Wednesday (Oct 21) on signs US lawmakers are edging towards agreeing a new stimulus for the struggling economy, while hopes for a vaccine helped temper worries about surging virus infections around the world.

After months of stuttering talks, and with a deadline approaching, Democrats and the White House said they were closing the gap on their proposals, with House Speaker Nancy Pelosi saying legislation was being drawn up.

The comments fanned optimism for a much-needed spending boost for Americans and US businesses, just as a fresh wave of coronavirus hits the country and threatens to trigger the reimposition of economically painful containment measures.

However, while Pelosi said she was hopeful a bill could be passed before the Nov 3 election, she warned it must go through legislative steps.

"I am optimistic," she said, but cautioned that "legislation is tough".

The White House has upped its offer by US$80 billion to US$1.88 trillion, which is still short of the Democrats' $2.2 trillion plan, but Donald Trump has said he is willing to go even higher.

Senate Majority Leader Mitch McConnell -- who has rejected massive spending packages -- changed course and said he would bring the package to a vote if there is a bill Trump supports.

But he would still have to win round other fiscally conservative Republicans, which could prove a tough task.

"It's very unlikely that a number of that level would make it through the Senate, and I don't support something of that level," Senator Mitt Romney told reporters, referring to the $1.8 trillion plan.

However, Axi strategist Stephen Innes said in a note: "Provided both parties are talking, if there is a will, there is a way as the political calculus allows for a pre-election deal. After all, what politician wants to be painted as voting for unemployment."

Markets remain upbeat even if nothing is passed before Nov 3, with traders broadly expecting a new package to be passed at some point, whoever wins the election.

And with Joe Biden well ahead in polls -- while Democrats could possibly win both houses of Congress -- there is speculation an even bigger deal could be pushed.

All three main Wall Street indexes ended well up, and most of Asia followed suit.

Hong Kong rose more than one percent, with local carrier Cathay Pacific surging more than five percent after announcing it would make huge job cuts and shut down one of its airlines.

Tokyo rose 0.5 per cent with Sydney, Singapore, Seoul, Taipei and Jakarta all in positive territory. Manila rallied almost two per cent as strict curfew measures were eased in the Philippine capital. But Shanghai fell after recent gains.

Vaccine hopes were given a lift after Moderna said its jab could be given approval for emergency use as early as December, while a report said AstraZeneca is expected to be allowed to restart trials in the US after being suspended worldwide in September when a volunteer fell ill.

The firm has already revived tests in Britain and elsewhere after being given permission.

The news comes as the disease sees frightening new flare-ups across the United States and in Europe, where numerous countries have been forced to introduce targeted lockdowns that have fanned fears for business survival and warnings of a possible double-dip recession. 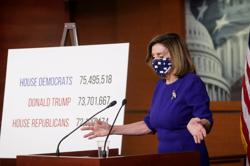