A pro-democracy protester gives the three-finger salute during an anti-government rally at the MRT Ministry of Public Health in Bangkok on Oct 19, 2020, as they continue to defy an emergency decree banning gatherings. - AFP

BANGKOK, Oct 20 (AP): Thailand’s Cabinet on Tuesday approved a request to recall Parliament for a special session to deal with the political pressures from ongoing anti-government protests.

The Cabinet at its weekly meeting approved the request, which calls for a non-voting session on Oct 26-27.

The request for the session came from House speaker Chuan Leekpai, who said Monday that both government and opposition parties supported it. Prime Minister Prayut Chan-O-Cha had already said earlier that he supports the move.

There is a deadlock between the government and the student-led protesters, who want Prayut to step down, the constitution to be amended to make it more democratic, and reforms to the monarchy to have it conform to democratic norms.

The protesters charge that Prayut, an army commander who led a 2014 coup, was returned to power unfairly in last year’s general election because laws had been changed to favor a pro-military party.

The protesters say a constitution written and passed under military rule is undemocratic.

But their more recent demand for checks and balances on the monarchy has deeply angered conservative Thais - and broken a taboo, since the monarchy is considered sacrosanct and tough laws protecting it from insult mean its role is not usually discussed openly.

It has also raised the risk of confrontation in a country where calls for political change have a history of being met with military intervention or even violence. The government has sought to weaken the protesters’ resolve over the past week by arresting their leaders, declaring a state of emergency for Bangkok that makes all rallies illegal, and trying to physically impede their gatherings, including by closing mass transit stations.

However, when it sent riot police backed by water cannons to break up a rally in Bangkok on Friday, it only drew widespread criticism for the use of force, and failed to discourage the protesters, who have continued to gather in large numbers every day. Protests have also spread to other provinces.

Parliament in September made its first attempt at dealing with one of the protesters' demands when it was scheduled to vote on six proposed constitutional amendments. But the vote was canceled at the last minute as Parliament voted instead to set up a committee to further consider such proposals.

Constitutional changes require a joint vote of the House and the Senate, but it was clear that the proposals lacked enough support in the Senate, whose members are not elected and are generally very conservative and hostile to the protesters.

Police announced Monday that they were seeking to impose censorship on media reporting of the protests, citing what they called "distorted information” that could cause unrest and confusion in society.

They said they sought to block access to the online sites of four Thai news organizations and one activist group that broadcast live coverage of the protests.

They also proposed a ban on over-the-air digital television coverage of one broadcaster, Voice TV.

Thai media reported Tuesday that a court ordered that Voice TV stop broadcasting on all platforms. The company, which was founded by the son of former Prime Minister Thaksin Shinawatra, who was ousted in a 2006 military coup, has been sympathetic to the protest movement in its coverage.

The government also confirmed that it would try to block use of the Telegram messaging app by protest groups, who announced on Sunday that they would use it for organising because they feared they might be blocked on other platforms, such as Facebook. - AP
Article type: metered
User Type: anonymous web
User Status:
Campaign ID: 18
Cxense type: free
User access status: 3 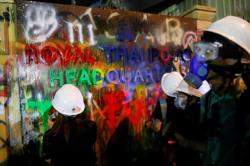 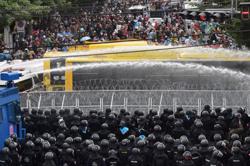