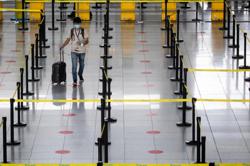 Philippine President Rodrigo Duterte talks with members of the Inter-Agency Task Force on the Emerging Infectious Diseases at the Malacanang presidential palace in Manila on Sept 28, 2020. Only one southern Philippine province and its war-battered capital will be placed under a mild lockdown and the rest of the country will be put under more relaxed quarantine restrictions next month to boost the battered economy despite the country having the most number of coronavirus infections in South-East Asia. - AP

MANILA, Sept. 29 (Xinhua): The number of confirmed Covid-19 cases in the Philippines surged to 309,303 after the Department of Health (DOH) reported 2,025 new daily cases on Tuesday.

The DOH said that the number of recoveries also rose to 252,930 after 290 more patients recovered. Meanwhile, 68 more patients died from the viral disease, bringing the death toll to 5,448.

The Philippines' capital Metro Manila topped the regions in the country with the highest number of daily confirmed cases on Tuesday with 628.

The Covid-19 has now reached all provinces in the Philippines after the northernmost province of Batanes reported Tuesday its first case since the disease emerged in the country in January, the DOH said.

"With Batanes recording a confirmed case, this means that all provinces have or have had COVID-19 cases," the DOH said in a statement.

Philippine President Rodrigo Duterte approved on Monday night the recommendation of an inter-agency coronavirus task force to extend the quarantine measures in Metro Manila until Oct 31.

It means that businesses, including shopping malls, and public transport are only allowed to operate at a limited capacity. Located on the main Luzon island, Metro Manila is home to an estimated 13 million people. However, the population swells to about 15 million during weekdays due to the influx of workers and students from outlying provinces of Bulacan, Rizal, Cavite, Laguna, and Pampanga.

The Philippines is slowly reviving the economy which was crippled by more than six months of lockdowns, while trying to control the spread of the virus.

Some tourist spots will be opened to local tourists in the coming days or weeks to revive the tourism industry. Boracay, a world-famous island resort in the central Philippines, will start admitting local tourists starting Oct. 1.

"We have slowly begun reopening our destinations for domestic travel with health and safety protocols in place.

"This gradual revival of the industry will bring back jobs and livelihoods to the rural areas, where many of our tourism products, such as beach, diving, ecotourism, arts and culture, and farm sites are found," Tourism Secretary Bernadette Romulo-Puyat said.

Health Undersecretary Maria Rosario Vergeire said the government has put in place safeguards to limit the transmission while opening some of the tourist spots.

"We cannot remain in lockdown forever. We need to survive. We need to live with this virus or what we call the new normal. So we need to enforce these health standards that we have to avoid infections," Vergeire added.

A limited transport system is allowed. However, passengers are required to keep distance and wear masks and face shields. Groceries, pharmacies, banks, and essential establishments are also open.

The Philippines continues to grapple with a surging number of Covid-19 cases despite the imposition since mid-March of varying degrees of lockdown measures that shut down 75 percent of the economy.

The Philippine economy shrank by 9.0 percent in the first half of 2020, the largest since 1985, due to the implementation of strict quarantine measures such as restrictions on mobility and closures of workplaces that choked economic activities. Millions of Filipinos also lost their jobs as a result. - Xinhua
Article type: metered
User Type: anonymous web
User Status:
Campaign ID: 18
Cxense type: free
User access status: 3 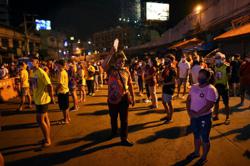