JAKARTA, Sept 18 (Xinhua): Rescuers on Friday found the helicopter, which lost contact on Thursday, in a deep forest in Indonesia's eastern province of Papua with all on board being survived, spokesman of National Search and Rescue Office Yusuf Latief said.

The chopper was found in a deep forest near a river, the spokesman told Xinhua via phone.

Latief ensured that the pilot, an engineer and two personnel of the air force, survived the incident.

"It was found that the crew were waving a piece of red cloth, asking for help," he said.

The propeller of the chopper was damaged, the spokesman said.

The aircraft carrying the rescuers failed to land on the scene as there is no favorable spot, he said.

Evacuation efforts, however, are going on, said the spokesman.

The Bell helicopter lost contact Thursday after departing from Nabire district heading to Baya Biru of Paniai district, he said.

The helicopter was operated by a utility helicopter company operating in Indonesia, according to him.

The search operation involves rescuers from local search and rescue offices, soldiers, police, personnel of the air navigation office, among others, he said.

In another development in the same state, dpa reported that suspected separatist rebels killed a soldier and a civilian in indonesia's restive Papua province, the military said Friday.

Later in the day, the group opened fire on soldiers carrying supplies in the same district, killing one, Suriastawa said.

The West Papua National Liberation Army (TPNPB), the armed wing of the separatist movement, claimed responsibility for the ambush.

"Sargeant Sahlan was shot and stabbed after indonesian soldiers withdrew," spokesman Sebby Sambom said in a statement, referring to the slain soldier.

Sambom did not mention the killing of the motorcycle driver.

Papua has been the scene of a low-level separatist insurgency since the 1960s. 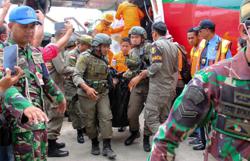