A man wearing a headband in Thailand's national colours reacts as members of Thai right-wing group "Thai Pakdee" (Loyal Thai) attending a rally in support of the government and the monarchy and in opposition to the recent anti-government protests, in Bangkok on Sunday (Aug 30, 2020). - Reuters

BANGKOK Aug 30 (AP): About 1,000 people gathered in a Bangkok sports arena on Sunday, swearing to defend Thailand's monarchy from a student-led mass movement that they believe is a threat to the institution’s existence.

Calling themselves "Thai Pakdee,” or "Loyal Thai,” most were dressed in yellow shirts - a colour closely associated with the monarchy and the ruling establishment. Some clutched portraits of current King Maha Vajiralongkorn and of his late revered father, King Bhumibhol Adulyadej, while others waved giant national flags.

The gathering took place as anti-government protests gather momentum across Thailand, posing the strongest challenge yet to the rule of Prime Minister Prayuth Chan-ocha. The former army chief first took power in a coup in 2014, then retained it in an election last year widely seen as rigged to all but guarantee his victory.

Speakers at Sunday's rally pledged to protect the monarchy and the nation. Videos were shown, one of which extolled King Maha's role in fighting communism in the 1970s, when a jungle insurgency threatened the country’s stability.

"I promise to fight shoulder to shoulder with brothers and sisters who share the same beliefs, to protect the beloved institution,” said one speaker, Patiyut Tongpajong.

Speaking to the media before the program began, Thai Pakdee leader Warong Dechgitvigrom, a former Member of parliament, said their aim was "to educate the people.”

The protesters that the royalist movement is responding to have three core demands: holding new elections, amending the constitution and ending the intimidation of critics of the government.

But some of the anti-government movement’s leaders stirred controversy with an unprecedented call for reform of the monarchy, which they see as out of touch and unaccountable.

The institution has traditionally been treated as beyond reproach. It is also protected by strict defamation laws that can bring punishment of 15 years in prison.

Even though the anti-government protesters have called for the reform of the monarchy, not its abolition, the supporters of Thai Pakdee believe a line has been unacceptably crossed.

Retiree Somporn Suklert enthusiastically cheered the speeches and clutched a "We love the King” scarf.

"I don’t care if you talk about politics. You can protest about the government - go ahead and do so. But do not touch the monarchy,” she said. "We cannot let that happen. That’s why so many of us came out today and you will see more.”

Samacha Sinlapakob, a 39-year-old office worker, teared up as he spoke about the situation.

"The groups criticize and defame the monarchy and spread misinformation with baseless facts," he said. "It’s clear they are attacking the top institution of the country.”

While those at the anti-government events are mainly young students, those at Sunday's rally appeared overwhelmingly to be retirees.

Fears are rising that Thailand could be on the verge of renewed political violence, with the students showing no inclination to compromise and the prime minister replacing his earlier conciliatory tone with a stern warning of impending chaos and a country engulfed in flames.

In the past 15 years, political polarization has led to sometimes chaotic street clashes between contending political blocs, as well as with security forces. 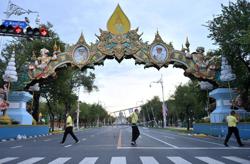