JAKARTA (The Jakarta Post/ANN): Education and Culture Minister Nadiem Makarim has fended off criticism over the government's decision to allow the reopening of more schools amid the pandemic, defending the policy as a difficult but necessary trade-off to maintain students' spirit of learning in a time of crisis.

“You can consider [the decision] bold in some aspects, but on the other hand, you can also see that we’re a little late, ” Nadiem said on Wednesday (Aug 12) during the webinar “Educating the Nation”, which is part of The Jakarta Post’s webinar series “Jakpost Up Close”.

“We are the second-last to reopen schools out of the 11 countries in Southeast Asia."

After previously giving the green light for schools in Covid-19 green zones, or low-risk areas, to reopen in mid-July, the government expanded its school reopening policy to schools in yellow zones, or moderate-risk areas, on Friday.

The move sparked criticism from teachers and paediatricians, who called for schools to stay focused on distance learning as they feared that sending children back to school could put them at risk of contracting the coronavirus.

Nadiem, however, said that conventional face-to-face learning was, in many cases, the only available option amid socioeconomic discrepancies among teachers and students across the archipelago.

He went on to say that, for instance, 88 per cent of the country’s least developed regions were considered green and yellow zones, and that they had no option but to reopen schools due to their limited access to decent internet connections and digital communication software.

“There’s always an element of increased risk in doing this, but when we have 50 per cent of our population struggling immensely for reasons that are not their fault, [...] the gap between them and the more well-to-do parts of the economy could become permanently unbridgeable, ” Nadiem said.

He called on the public to view the current situation not only as a health or economic crisis, but also as an education crisis that could have lasting repercussions for the future of Indonesian youth.

“This is something we need to balance in our considerations and policies, while maintaining as strict a health protocol as possible, ” he added.

In response to concerns over the health and safety of students returning to schools amid the pandemic, Nadiem said the government had issued an official guideline mandating – among other things – a limit on the number of students allowed to attend classes on a given day and the temporary closure of all extracurricular, nonessential activities.

Furthermore, the decision to reopen schools ultimately falls on the parents themselves, he asserted.

Official data shows that 57 per cent of Indonesian students currently live in red and orange zones, while the remaining 43 per cent are in green and yellow zones across 276 cities and regencies.

The Federation of Indonesian Teachers Associations (FSGI) previously said that reopening more schools risked creating new infection clusters. The group has received reports of at least 180 teachers and students from across the nation who have tested positive for the virus. - The Jakarta Post/Asia News Network 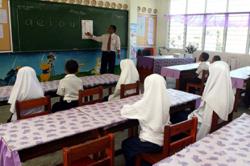