Ta Hien Street in Hanoi's downtown area. Many National Assembly deputies agreed that in the revised law on residency, there is no need to regulate extra requirements for residents when they want to register to live in centrally-run cities like Hanoi. — VNA/VNS Photo Thanh Dat

HÀ NỘI, Aug 11 (Vietnam News/ANN): The need to have extra requirements for people when applying for regular residency in cities affiliated to the central Government, also known as centrally-run cities like Hà Nội or HCM City, remains controversial in the agenda of the National Assembly’s Standing Committee on Monday.

Speaking at the meeting, Chairman of the Legal Committee of the National Assembly, Hoàng Thanh Tùng, said that many National Assembly deputies agreed that in the revised law on residency, there was no need to regulate extra requirements.

Some said a roadmap was needed to remove the extra requirements, especially for residency registration in Hà Nội and HCM City to ensure that infrastructure and necessary services could deal with increasing population if the current residency policy is loosened.

However, there remain opinions supporting the existence of extra requirements in centrally-run cities as regulated in current law.

Under the draft of the revised law on residency, People’s Councils at the provincial level are empowered to decide average housing areas as a criterion for applying for regular residency.

Meanwhile, Hùng said the regulation would add a requirement for people when they applied for regular residency in provinces, creating discrimination in exercising people’s residency rights in different localities.

Other deputies argued that when citizens’ regular residency registration was removed, their rights would be affected and they would face difficulties when applying for relevant public administrative services.

Under the draft law, the manual method of residence management by household registration book and temporary residence certificate will be replaced with e-management using information technology.

Specifically, authorities will use citizens' personal identification numbers to access and update information on the National Database on Population, which is shared and connected with ministries and agencies.

As the draft revised law is approved and is expected to take effect from July next year, the household registration books will be invalid.

However, some deputies are still sceptical about the deadline, saying that there was not enough time to complete the relevant population database and make it ready for use.

The NA Standing Committee suggested adding a regulation on the transition period during which State agencies and people can use both information available on the national population database and paper-based residency documents like household registration books in administrative services, especially in localities with infrastructure failing to connect to the national population database.

The transition period is suggested to last until the end of 2025.

Speaking at the meeting, vice chairman of the NA Standing Committee Uông Chu Lưu said that the revised law on residency was an important bill concretising the Constitution 2013’s regulations on citizens’ freedom to residency.

The bill also required speeding up the application of information and technology in population management, administrative procedure simplification and creating more convenience for people when exercising their rights.

The residency policy aimed to ensure citizens’ living conditions, the right to education and the implementation of disaster relief or social welfare.

“Residency registration requirements must not be used to prevent rural people from moving to urban areas for living and working, ” Phóng said.

Also at Monday's meeting of the NA Standing Committee, the draft revised law on administrative fines was discussed.

Minister of Justice Lê Thành Long said that fines for the violation under current law were up to VNĐ30-40 million.

Accommodation which receives foreigners and lets them stay overnight without reporting to authorities about their stay or instructing them to report their stay face a fine of up to VNĐ2 million.

Foreigners crossing the border without undergoing immigration procedures face a fine of up to VNĐ5 million. Besides fines, violators would have property seized, they would be expelled or face other criminal sanctions.

Giàu said that stricter punishments were needed as illegal immigration was growing in Việt Nam.

“At first, I heard about illegal immigration at border provinces but then learned that illegal immigrants travelled far into the country, ” Giàu said, urging lawmakers to review and revise current regulations. VNS 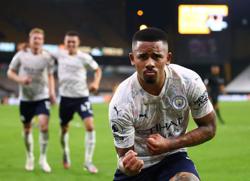 Manchester City off to winning start with victory at Wolves 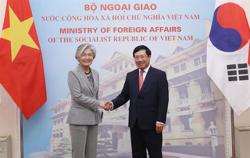