A green sea turtle makes its way after being released on Kuta beach near Denpasar on the Indonesian resort island of Bali on Aug 5, 2020. - AFP

KUTA, Indonesia (Reuters): Indonesian authorities released 25 green turtles into the sea on the island of Bali on Wednesday (Aug 5), returning them to freedom after they were rescued last month during a raid on illegal traffickers.

The population of the endangered turtle, a protected species in Indonesia, has declined significantly in recent years due to hunting, loss of beach nesting sites, over-harvesting of their eggs and being caught in fishing gear.

Officials stroked and gently patted the heads of the turtles as they were lined up on the beach, some digging their flippers into the sand before slowly pulling themselves into the sea as waves crashed over them.

There were 36 turtles in total rescued and the remaining 11 will be released next week.

Agus Budi Santoso, head of the Bali Natural Resources Conservation Center, said the turtles needed to be assessed fully to ensure they were healthy and able to cope in the natural environment.

"If they cannot adapt to the environment, we cannot release them," Santoso said.

Indonesia has become a hub of international trafficking of marine turtles, feeding demand in countries like Malaysia, Vietnam and China. Anyone convicted of involvement in the trade can be jailed for up to five years.

Santoso said improvements in law enforcement had helped to reduce the trade in sea turtles.

The green turtle, one the largest sea turtles, is also a victim of the world's growing ocean plastics crisis and is known for eating plastic bags, mistaking them for jellyfish, according to World Wildlife Fund, which said many turtles had plastic in their stomachs. 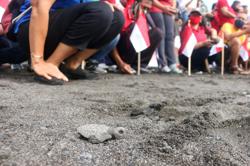 Indonesia: Thousands of baby turtles get first taste of the sea 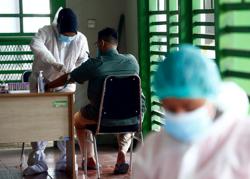