A saleswoman wearing a face shield distributes leaflets on the street amid the coronavirus disease (COVID-19) pandemic in Tokyo, Japan, on Monday (August 3, 2020). - Reuters

Harada, who served on the BOJ's board until March, said that the central bank had taken sufficient steps to cushion the pandemic's immediate blow to the economy, and that fiscal policy must now take a lead role in supporting growth.

"I'm not sure whether fiscal policy is doing the job right," he told Reuters on Monday, criticising Abe's $16 billion "Go To" tourism campaign to promote travel across the country.

"The purpose may have been to engineer a 'V-shaped' economic recovery once the pandemic is contained. By launching this campaign now, it risks causing a 'V-shaped' rebound - not just in the number of tourists but that of infections," he said.

The campaign was launched to rescue Japan's tourism industry, which has been hit hard as the coronavirus keeps foreign visitors at home.

Abe excluded Tokyo from the programme as record numbers of infections in the capital sparked concern the virus could spread to other areas.

Harada joined the BOJ board five years ago as a proponent of Abenomics, a policy deployed in 2012 to end deflation with a mix of bold monetary policy, fiscal measures and structural reforms.

But inflation remains far off the BOJ's 2% target, while the pandemic is threatening to wipe out the benefits of Abenomics by hitting jobs, corporate profits and tourism.

"If the economy starts to recover, long-term rates may rise a bit. If so, the BOJ could increase bond purchases," said Harada, who is now professor at Japan's NUCB Business School.

Meanwhile, Tokyo Gov Yuriko Koike issued a warning Saturday in an online video, urging people to wash their hands, wear masks and visit those businesses that display the special city-backed stickers with the image of a rainbow, which indicates good social distancing.

Most people getting sick are in their 20s and 30s, highlighting how they may be putting their guard down and going out partying, according to officials.

The health ministry has announced that 25,906 patients with Covid-19 symptoms have fully recovered. - Reuters 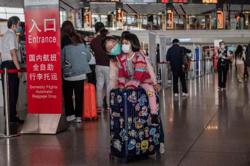