This file photo taken on Nov 29, 2016 shows South Korean President Park Geun-Hye speaking during an address to the nation, at the presidential Blue House in Seoul. A Seoul court on Friday slashed the disgraced official's prison terms by 10 years, in what should be the final ruling over the corruption scandal that brought her down from her post. - AFP

Seoul, July 10 (AFP): A Seoul court on Friday slashed disgraced former president Park Geun-hye's prison terms by 10 years, in what should be the final ruling over the corruption scandal that brought her down.

The country's first female president was impeached in 2017 after huge street protests against her rule.

She had been serving a combined 30-year jail term for bribery, abuse of power and receiving money from the national spy agency.

But on appeal the Seoul High Court sentenced Park to 15 years in prison for bribery and a further five years on the other charges.

Park "failed to fulfil her constitutional obligations as a President", but did not use the illegally gained funds for her personal benefit, the judges said in a statement.

She was also fined and ordered to forfeit a total of 21.5 billion won (US$17.9 million) -- a slight reduction on her previous penalty.

The decision comes after an extended legal process involving multiple trials and appeals going as far as the Supreme Court.

Park has been boycotting the proceedings, saying they are biased against her, and was not present in court on Friday.

In addition, she has separately been sentenced to two years in prison for election law violations, which applies consecutively.

She now faces a total of 22 years behind bars and she would be in her late 80s by the time her sentence is up.

The corruption scandal exposed shady links between big businesses and politics in South Korea, with Park and her close friend Choi Soon-sil accused of taking bribes from conglomerates, including Samsung Electronics, in exchange for preferential treatment.

Park's left-leaning successor Moon Jae-in was swept to power by the public backlash against her and her conservative party.

South Korean presidents have a tendency to end up in prison after their time in power, usually once their political rivals have moved into the presidential Blue House.

All four of South Korea's living presidents have been convicted of criminal offences, although Park's predecessor Lee Myung-bak was granted bail earlier this year. 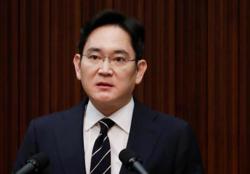