Extradition of Maria a ‘cover up’ for failure to arrest other fugitives, say experts

JAKARTA (The Jakarta Post/ANN): Indonesia succeeded in finally repatriating fugitive Maria Pauline Lumowa, who had been wanted for 17 years for allegedly stealing billions of rupiah from a state-owned bank, from the Republic of Serbia on Thursday.

The successful extradition, however, should inspire the authorities to catch other high-profile suspects and convicts who have fled the country, experts have insisted.

On Thursday morning, the Law and Human Rights Ministry’s extradition team escorted Maria as the group arrived at Soekarno-Hatta International Airport from Belgrade, where the Serbian government had formally handed her over to Indonesian authorities.

Maria was named a suspect for fraudulent gains she made from loans from state-owned lender Bank Negara Indonesia (BNI) issued to her company PT Gramarindo Group, which she co-owned with Adrian Waworuntu. She allegedly used a fictitious letter of credit to obtain US$136 million and 56 million euro ($118,846) in bank loans between 2002 and 2003.

BNI grew suspicious about the company and reported the case in June 2003 to the National Police, which opened a fraud investigation.

However, Maria reportedly fled to Singapore in September 2003, just a month before the police investigation team named her a suspect in the case. Interpol issued a red notice in December 2003 for Maria, who had by then been on the run for three months.

Meanwhile, the South Jakarta District Court tried and sentenced Adrian in 2005 to life imprisonment for corruption.

Yasonna said in a statement that authorities later discovered that Maria – who was born in Paleloan, North Sulawesi in 1958 – had obtained Dutch citizenship in 1979 and was hiding in the Netherlands, from where she reportedly made several trips to Singapore.

He added that the ministry had sent requests for her extradition to the Dutch government in 2010 and 2014, but they were rejected.

The Interpol National Central Bureau (NCB) in Belgrade apprehended Maria on July 16,2019, as she was entering the country through Belgrade’s Nikola Tesla Airport and alerted the Indonesian NCB in Jakarta.

The Law and Human Rights Ministry then issued a request for Maria's temporary detention and extradition from Serbia.

“We, along with law enforcers, will work to recover from abroad assets obtained by Maria [from her crimes]. We will take all legal measures to freeze her assets, including by blocking her bank accounts, ” Law and Human Rights Minister Yasonna Laoly said in a statement on Thursday.

While many lauded the government for the extradition, experts have called on the authorities to capture other high-profile suspects and fugitives that have fled overseas.

The fugitive list includes Djoko Tjandra, who was convicted in 2009 for embezzling billions of rupiah from the state bailout fund during the 1998 Asian financial crisis. He escaped to Papua New Guinea (PNG), a day before a court announced the verdict and he reportedly obtained PNG citizenship later that year.

After being at large for more than a decade, Djoko has reportedly returned to Indonesia to file a review of his case, although his whereabouts remain unclear. He was absent from the first hearing in his case review on Monday.

Attorney General ST Burhanuddin previously criticised the immigration authorities for their failure to notify his office of Djoko’s arrival in the country. However, the immigration office claimed it had found no trace of Djoko in its system.

Zainal Arifin Mochtar, a researcher at Gadjah Mada University’s Center for Anticorruption Studies (PUKAT UGM), said the government had managed to capture Maria in Serbia but failed to bring home Djoko from PNG, despite the fact that Indonesia does not have an extradition treaty with either country.

“Such a failure is caused by the lack of a government programme to repatriate them to Indonesia. There is no measurable target and single well-planned effort to bring them back home, ” Zainal said on Thursday.

He added that the fugitives’ immense wealth might have hindered efforts to capture and extradite them because they had brought economic benefits to the countries to which they had fled.

"Maria's extradition case has proven that if the government is serious, it can catch fugitives, including Djoko Tjandra and other high-profile ones, ” Boyamin said in a statement.

He highlighted other major fugitives, including Eddy Tansil who was found guilty of having embezzled $565 million in state funds in a loan scam channelled by the Bank Pembangunan Indonesia (Bapindo) to his Golden Key Group

Eddy escaped from prison in 1996 while serving his 20-year prison sentence, and has reportedly hidden in China since at least 2011.

The Law and Human Rights Ministry was not immediately available to comment on the experts’ calls to arrest other fugitives.

BNI corporate secretary Melly Meiliana said in a statement that the bank appreciated the government’s efforts to extradite Maria and would support the ongoing legal proceedings, which could become an opportunity to recover some of the losses endured by the lender. - The Jakarta Post/Asia News Network 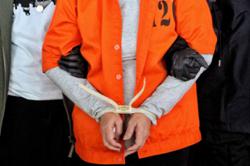