VIENTIANE, July 7 (Xinhua): Laos reported 80 new confirmed cases of dengue fever countrywide, bringing the total number of infections to 2,564, with most of the cases occurring in Lthe country's capital Vientiane.

Laos Ministry of Health reported in its press release on Tuesday that 2,564 people had been diagnosed with dengue fever and seven deaths had been recorded since January.

The seven deaths included three in Lao capital Vientiane, two in Bolikhamxay, and one each in Khammuan and Xayaboury.

Laos health authorities are encouraging people to clear potential mosquito breeding sites around their homes and workplaces to help control the spread of dengue fever.

The Health Ministry will continue to work closely with central and provincial health departments to follow up on trends in dengue transmission and encourage the clearing of mosquito breeding sites, according to the report.

Meanwhile the Health Ministry also said that Laos has conducted 18,091 tests for Covid-19 since January, with 19 of them positive.

Laos has been carrying out tests daily for the Covid-19 since January, with the total number of tests reaching 18,091, with 19 cases tested positive, Center of Information and Education for Health under Lao Ministry of Health reported in its press release on Tuesday.

Among 18,091 people who have done such test for the virus, 19 cases have been confirmed and all of them have been discharged from hospitals.

On Monday, a total of 1,809 people entered Laos through international border checkpoint. The temperature of each person entering laos was checked and no one showed signs of fever.

The National Taskforce Committee for Covid-19 Prevention and Control announced it has been monitoring 4,060 people at 88 accommodation centres across the country.

The Laos government has warned people countrywide and relevant authorities not to neglect containment and preventive measures to prevent a second wave of the disease. 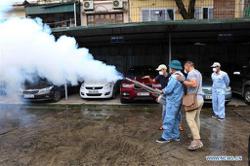