Experimental spaceship: Engineers opening the module of the prototype of China’s new-generation manned spacecraft that returned to Earth earlier this month. — China Daily/ANN

BEIJING: The return capsule of the trial version of China’s new-generation manned spaceship was opened in Beijing, with almost 1,000 devices and materials delivered to various institutions and organisations for further research and experiments.

A ceramic 3D printing device, crop seeds and herb seeds were among the items delivered.

The experimental spaceship was in orbit for 67 hours, at a height of between 300km and 8,000km above the Earth’s surface.

The return capsule successfully came back to the Dongfeng landing site in north China’s Inner Mongolia Autonomous Region on May 8 and was delivered to Beijing on May 15. — Xinhua 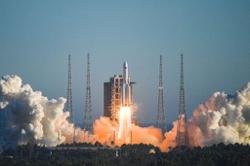 China's space station to be unveiled by 2022