Local residents try to save melon-headed dolphins stranded on the coast in Hokota, north-east of Tokyo on April 10, 2015. -- PHOTO: AFP.

TOKYO (AFP): The mass beaching of more than 150 melon-headed whales on Japan's shores has fuelled fears of a repeat of a seemingly unrelated event in the country - the devastating 2011 undersea earthquake that killed around 19,000 people.

Despite a lack of scientific evidence linking the two events, a flurry of online commentators have pointed to the appearance of around 50 melon-headed whales - a species that is a member of the dolphin family - on Japan's beaches six days prior to the monster quake, which unleashed a towering tsunami and triggered a nuclear disaster. 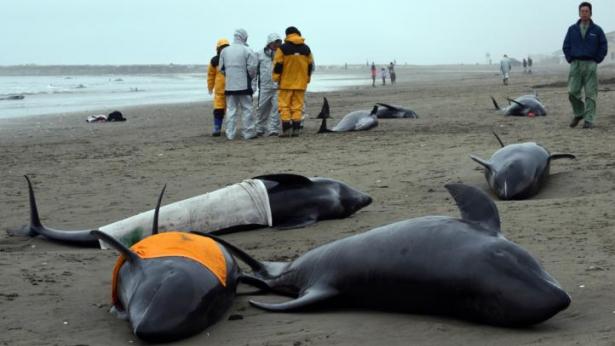 Residents attempt to save melon-headed whales beached on the shore of Hokota city, north-east of Tokyo on April 10, 2015. -- PHOTO:AFP.

Scientists were on Saturday dissecting the bodies of the whales, 156 of which were found on two beaches on Japan's Pacific coast a day earlier, but could not say what caused the beachings.

"We don't see any immediate signs of diseases on their bodies, such as cancer. We want to figure out what killed these animals," Tadasu Yamada, a senior researcher at National Museum of Nature and Science, told public broadcaster NHK.