'Cabinet must move as a team'

PUTRAJAYA: Tan Sri Muhyiddin Yassin was dropped from the Cabinet as the Prime Minister wanted to ensure his ministers could move as one solid team.

Datuk Seri Najib Tun Razak said he could accept differences of opinion and criticism but ministers should not air them openly because it could jeopardise public perception towards the Government and country.

The Prime Minister added that it also went against the concept of collective responsibility in the Cabi­net.

“The decision to replace Muh­yiddin was a very difficult one, but I had to do it so that Cabinet members can move as one solid team,” Najib said when announcing the new line-up at his office here yesterday.

He said he reshuffled the Cabinet to strengthen the line-up of ministers in facing the challenge of managing the country before the next general election.

“It is to ensure that the administration under me remains committed, always focused on efforts to develop the country as has been promised by the Barisan Nasional Government to the people during the 13th general election,” Najib added.

He said his decision to replace Muhyiddin with Datuk Seri Dr Ahmad Zahid Hamidi, along with other changes in the line-up of mi­nisters and deputy ministers, was taken after considering the Government’s political and admi­nistrative interests.

“For this purpose, the Cabinet must act as one solid team in whatever situation to continue the Government’s development agenda and manage national issues which arise so that we can act effectively,” he said.

Najib added that he was confident that his new line-up would be able to continue the Government’s aim to increase the people’s con­fidence in and support for the Barisan Nasional Government.

The Prime Minister thanked Muhyiddin and other ministers and deputy ministers who were no longer in the line-up for their services.

Najib added that the appointment of the new ministers and de­­puty ministers would come into effect today.

The new members of the administration will be sworn in before the Yang di-Pertuan Agong at Istana Negara at 10am. 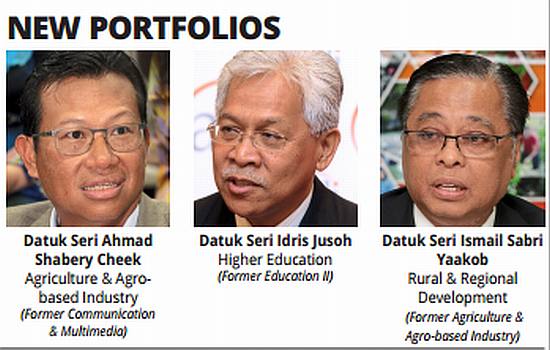