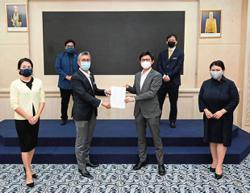 IPOH: MCA Youth has advised people not to spread videos of Saturday's melee at Low Yat Plaza as it could cause racial tension.

Its chief, Chong Sin Woon (pic), said videos of the incident, where a group of men went to a shop at the mall smashing electronic goods, from several perspectives had been published on social media.

He said people should not pass judgment and comments over the incident.

"One side is blaming the other and urging people to boycott the shop," Chong said after opening the Perak MCA Youth annual general meeting here on Sunday.

"The videos could spread hatred and create racial tension among the people," he added. He called on the police to act swiftly.

Chong said such incidents could spread fast on social media.

"We must be aware of a current trend where people behind the scene are creating tension among the people," he added.

Police have said the incident was one of thuggery started by a shoplifting incident.