The state exco has passed a resolution on ‘No shark’s fin soup for all official functions’ and notices will be sent to all state government agencies not to include the delicacy in the menu at any state hosted events. 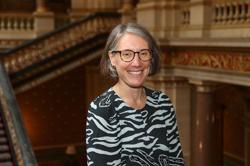