By MICHELLE TAM and STEPHANIE LEE

PETALING JAYA: The 7.17am earthquake in Ranau may have been caused by aki (mountain protectors) angered over tourists who stripped and urinated at Mount Kinabalu.

While most on Twitter said they were just “waiting” for people to blame the 6-magnitude earthquake on the disrespect shown to the sacred site, some were not convinced that there was no link between the two incidents.

A Sabahan web developer, who declined to be named, half-jested that the recent incident of naked, urinating tourists at the sacred site made “mountain spirits mad”.

Tweeter ‏@Zulfahmiabsalam said a friend from Sabah thought Mount Kinabalu may be “angry” because of the naked tourists.

However, @Zaxania on Twitter said any attempt to link the two incidents is a “stupid statement”, and told others to not relate the quake to the tourists who answered the call of nature of Mount Kinabalu.

On May 30, pictures of five naked men on the mountain ­surfaced on social media, followed by a picture of the 10 tourists - including four women - undressing near the south peak of Mount Kinabalu.

Sabahans railed against the images, as they consider the mountain sacred.

Sabah Parks director Datuk Jamili Nais said the four women and six men had split from their group and gone on to the south peak.

The tourist ignored the warnings from their mountain guide, calling him “stupid” and telling him to “go to hell”, when he pleaded with them to stop as they took off all their clothes and posed for pictures.

A show-cause letter has been issued to the guide over the incident.

All guides have also been told to ensure they clearly state that going naked on the mountain was strictly prohibited during their briefings to climbers in the future. 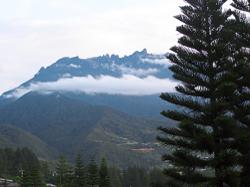