PETALING JAYA: Up to 22 million hectares of forest in Borneo are under threat of being felled by 2030, the World Wide Fund for Nature (WWF) has warned.

The combined area, covering forests in Malaysia and Indonesia, is nearly twice the size of Sarawak or the peninsular.

The WWF’s Saving Forests at Risk report describes it as “a major deforestation front”.

Although much of the deforestation is expected to be in Kalimantan, the report also roughly zoned three areas in Sabah and Sarawak.

According to the report, these areas were in danger of being logged or being converted into oil palm plantations. 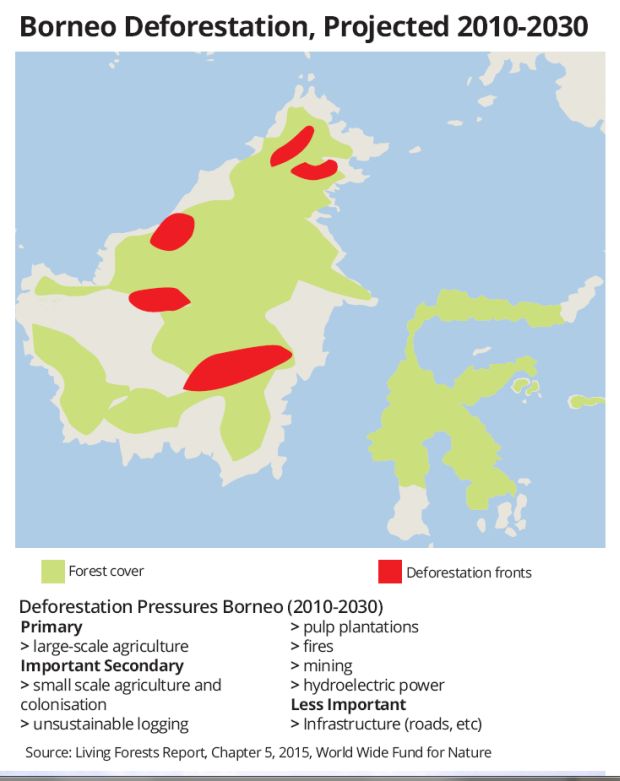 “Most new plantations are expected to be in Sarawak,” the report said without specifying which forests were likely to be felled, or how big the areas were expected to be.

It also listed dam-building, deliberate forest fires and mining to be among the causes of Borneo’s future forest losses.

“Fire impacts have been greatest in West Kalimantan, Central Kalimantan and Sabah,” the report noted.

It said roads carved into forests made it easier for settlers and loggers to enter remote forest areas, adding that Sabah and Sarawak had 364,000km of roads in forests.

The island of Borneo was listed as one of 11 deforestation fronts worldwide, including the Amazon, Congo Basin, Sumatra and the Greater Mekong.

The report stated that the Malaysian and Indonesian governments were committed to conserving forests within Borneo’s inland areas.

However, it also implied that environment plans could be made by higher-ranking officials but those at the lower end might not follow through.

For example, it said Indonesia was committed to preserving 45% of its Kalimantan provinces as forests but this was not reflected in district and provincial development plans.