PETALING JAYA: More than 25,000ha – larger than the size of Kuala Lumpur – of mangrove forests were felled in the past 12 years, pushing coastal species towards extinction and exposing people to rising sea levels.

Data from the US-based World Resources Institute (WRI) revealed this vast “disappearance” between 2001 and 2012.

The study noted that some 25,810ha of mangrove tracts – more than three times the global mangrove forest loss rate during the same time – had been cut down in Malaysia.

“Malaysia lost 4.6% of its mangroves from 2001 to 2012, an area larger than the whole Federal Territory of Kuala Lumpur,” WRI research assistant Asa Strong told The Star. Universiti Malaysia Terengganu’s Dr Edlic Sathiamurthy said the destruction might have been greater than what WRI believed.

Some fish farms today, he said, were previously palm oil plantations converted from mangroves decades ago.

“If you look at the west coast from Kedah southwards, there are huge tracts of mangrove converted to agriculture. We can see massive clearing,” he said.

“Even some animals like the silver leaf monkeys make their home there,” he said.

“If you kill the mangroves, you’ll have big problems,” he warned.

Aquaculture, he added, was not sustainable as farms would become polluted after a few years of intensive farming and later be abandoned.

He, however, added that governments were more likely to lean towards aquaculture as they drew more profits in the short-term.

Malaysia has about 551,333ha of mangrove forest.

In 2013, aquaculture in brackish water areas made some 397,312 tonnnes of produce, with a wholesale value of RM1.8bil that year. 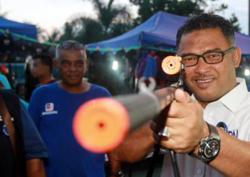