To combat this, she will be launching her own blog Jane Goodalls All Good News, beginning this April.

It will be sharing stories of hope. 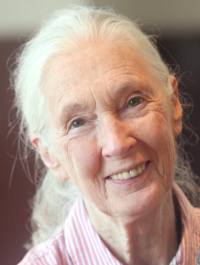 “When people are depressed or feeling sad, they can go to the blog. That’s my antidote,” she told reporters after giving a talk titled “Reasons for Hope”, organised by Roots and Shoots Malaysia, at Berjaya Times Square Hotel here yesterday.

She also shared her thoughts on the legends of Bigfoot, and China’s Yeren – large apelike creatures that are part of folklore.

“These legends are all over the world,” she said, adding that when she visited Ecuador, she had asked the natives whether they had ever seen a monkey without a tail.

“Three different farmers got word to me saying yes, they had seen a monkey without a tail, and it was six foot tall and walked upright. I am a romantic. I want something to be there!” she said.

The newly launched Roots and Shoots Malaysia is a humanitarian and environmental youth programme founded by Dr Goodall, with the support of Berjaya Youth (B-Youth), a youth empowerment initiative set up by Berjaya Corporation.

During her talk, which captivated hundreds in the audience, Dr Goodall encouraged people to take little steps to better the world, as a collective effort from millions would have a large impact.

“Man is the only creature which destroys its own home,” she said, saying there was a disconnect between humanity’s uniquely intelligent brain and its sense of compassion.

Dr Goodall said she was particularly concerned about the deforestation of tropical rainforests and climate change.

“Often these things come down to people power,” she said.

Dr Goodall said she was often inspired by passionate young people and even CEOs who admitted to making mistakes and putting things right.

After the launch, Roots and Shoots head Jyunichi Washizaki said the NGO was looking into collaborations with organisations such as Kiwanis and a selection of high schools to promote volunteerism in 2015.

A grant of RM500,000 was donated by Tan Sri Vincent Tan through the Better Malaysia Foundation to help out Roots and Shoots.

During his speech, Tan joked that Dr Goodall had inspired him to become a vegetarian and that he found her life’s work extremely impressive.

“Her organisation deserves much more financial support,” he said to applause, later joking with her that her efforts would not make her popular with timber tycoons and oil palm barons.